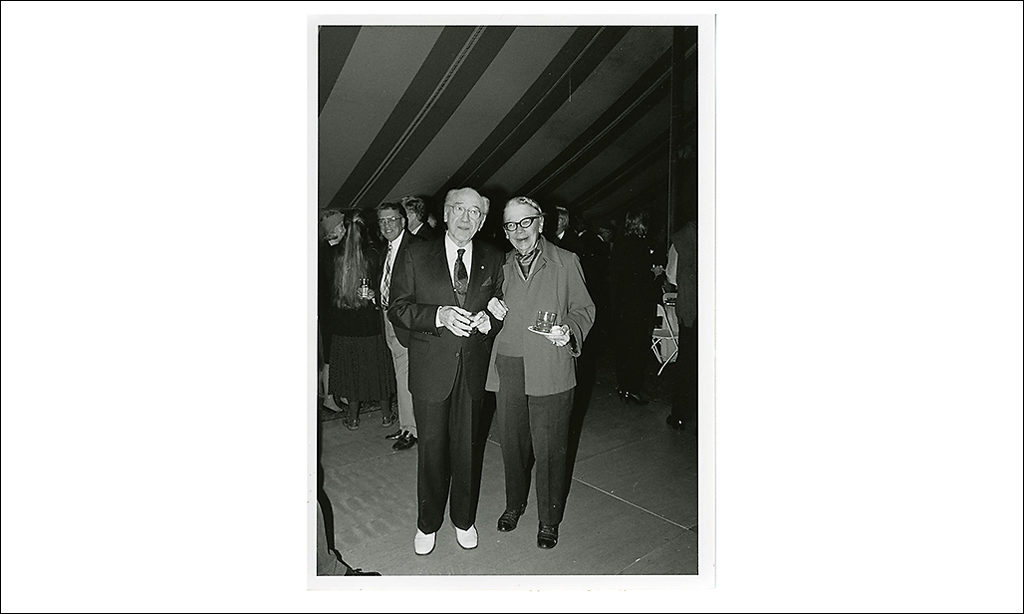 As we mark what would have been our 61st annual Medal Day this weekend, we are featuring composers in our Legacy series, and so are honoring a dear friend of MacDowell who enjoyed 41 residencies between 1943 and 1995, composer Louise Juliette Talma.

Louise Talma (1906–1996) composed in a distinctive, often neo-Classical style. She wrote many vocal pieces, including song cycles and the first American opera by a woman to be staged at a major European opera house. In all, Talma composed more than 40 significant works in her lifetime. She also became the first American to teach at the prestigious Fontainebleau School and was a faculty member at New York City's Hunter College for more than half a century.

Talma was born in Arcachon, France, a resort town near Bordeaux. Her father died while she was still a child, and her mother, a singer, moved with her daughter to New York City in the summer of 1914. There, Talma studied chemistry at Columbia University while pursuing piano and composition studies at the Institute of Musical Art, the music academy that later became the Juilliard School of Music. Talma took courses there from 1922 until 1930, winning the Seligman Prize for composition in 1927, 1928, and 1929. She later earned her bachelor of music degree from New York University in 1931, and in 1933, an M.A. degree from Columbia.

Talma's earliest compositions included Song of the Songless (1928); Three Madrigals (1928), a piece for voice and string quartet with vocal settings that characterized much of her later work; Two Dances (1934); and a sacred work titled In principio erat verbum (1939), which won the Stovall Prize at the Fontainebleau School in both 1938 and 1939.

Beginning in 1943, Talma began decades of residencies at MacDowell, the most of any MacDowell Fellow, followed by playwright Esther Willard Bates, who had 35, and composer Mabel Wheeler Daniels, who had 25 residencies. The majority of Talma’s compositions were written here, and she met and was influenced by composers of the so-called Boston school (Arthur Berger, Lukas Foss, Irving Fine, Harold Shapero, and Claudio Spies). She continued to write in her neo-Classical style until 1954, when serial techniques appeared in her composition Six Etudes for piano. In her opera The Alcestiad (1955 - 1958), with text by Thornton Wilder, she combined her previous tonality with these new serial procedures. 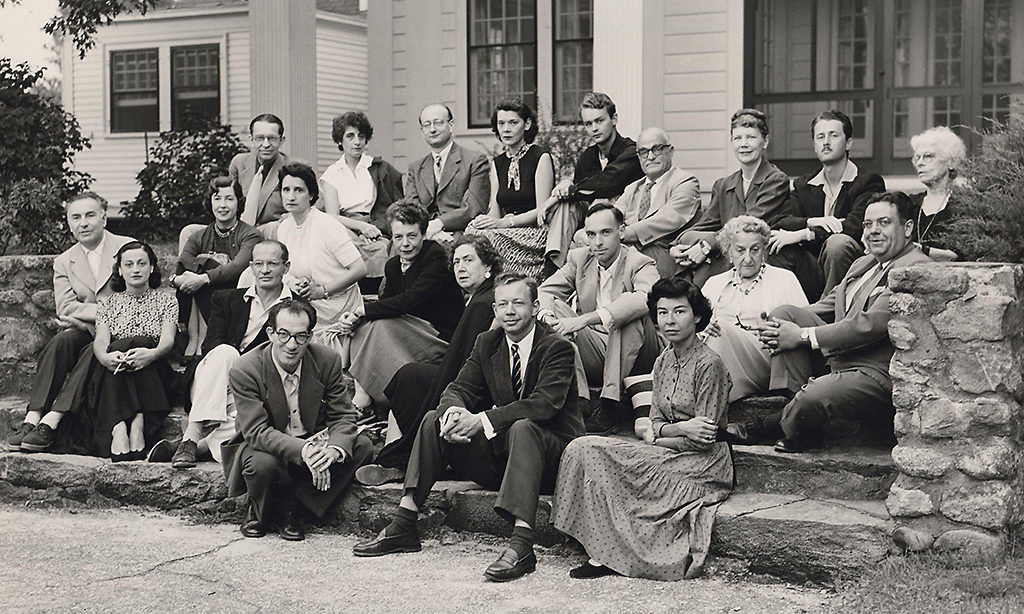 Louis Talma (third from right in top row, sitting to Thornton Wilder's left) poses with her summer 1952 Fellow cohort on the steps behind out main hall. Also in this image are Nikolai Lopatnikoff, Margaret Widdemer, Elizabeth Sergeant, and Arthur Cohn.

Talma was awarded Guggenheim fellowships in 1946 and 1947, making her the first woman to receive the honor twice. She continued to receive numerous awards for her composition skills, including three in 1963 alone: a National Federation of Music Clubs Award, a National Association for American Composers and Conductors Award, and the Sibelius Medal for Composition at the Harriet Cohen International Awards in London.

Talma's career included not only composition but also pedagogy. She published two textbooks, drawing on her experiences both as a composer and as a teacher: in 1966, Harmony for the College Student, and in 1970, with James S. Harrison and Robert Levin, Functional Harmony.

In 1974 Talma became the first female composer elected to the American Institute of Arts and Letters, and the following year, she held the position of Clark Lecturer at Scripps College. Talma continued to teach at Hunter College until mandatory retirement in 1976 and remained as a professor emeritus until 1979. During the summer of 1978, she returned to the Fontainebleau School as an instructor, becoming the first American woman to serve as an instructor at the institution.

Talma died on August 13, 1996, while in residence at Yaddo, and provided a bequest for $1 million for MacDowell in her will. At the time of her death, she was working on a song cycle with chamber accompaniment. She is buried in Hawthorne, NY. 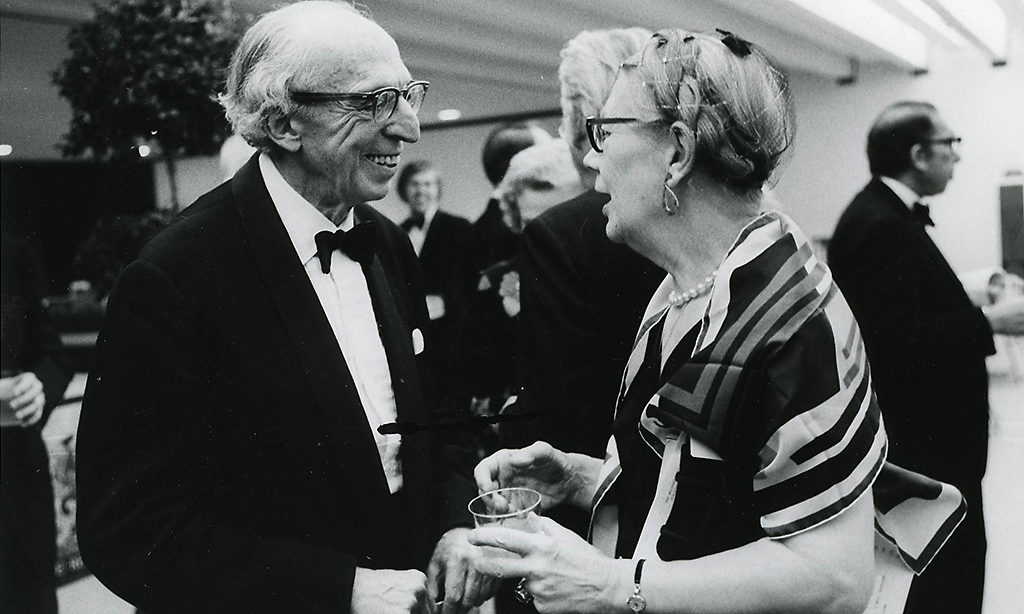 Louise Talma speaks with friend Aaron Copland on the occasion of his 75th birthday celebration at the New York Benefit in 1975.

Read an interview with Bruce Duffie during which Talma speaks of MacDowell. You can also watch a webcast entitled: Meaning & Myth in Louise Talma's First Period Works created for The Library of Congress. 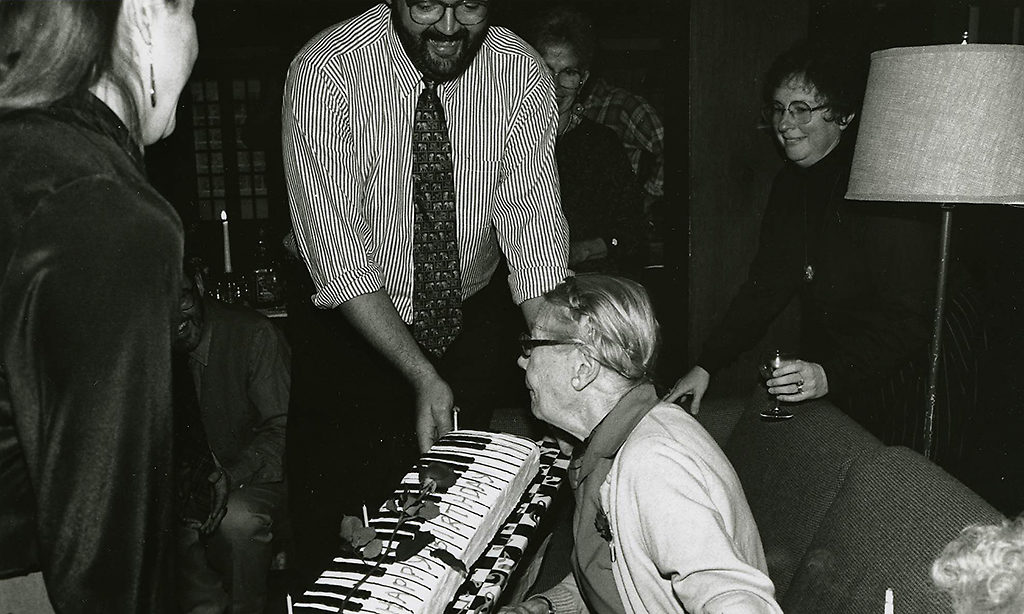 Louise Talma blows out the candles on a cake baked for her at MacDowell on her 80th birthday. (Joanna Eldredge Morrissey photo)