MacDowell Tombstones: They Were Here 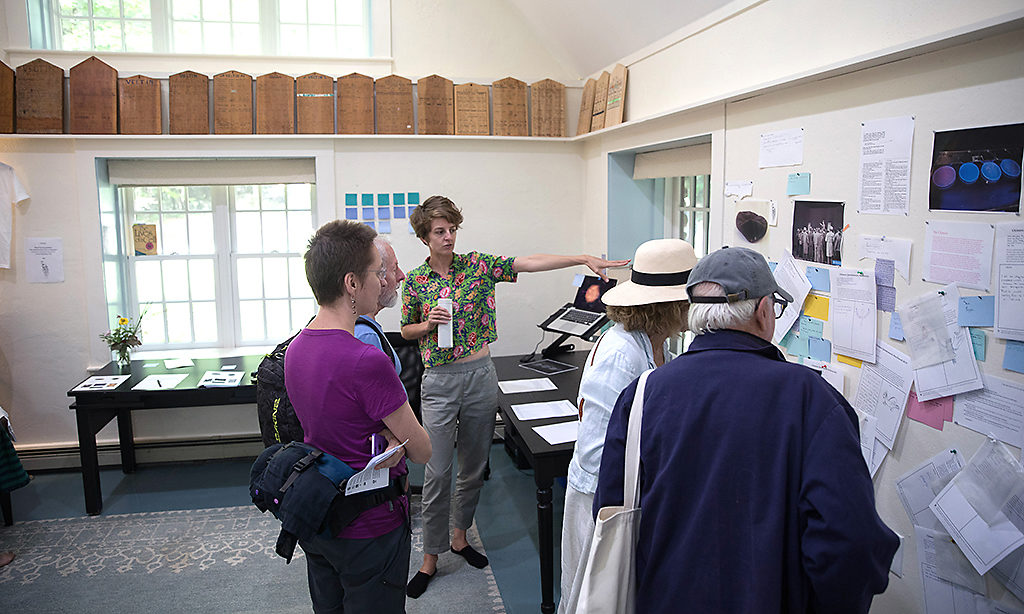 Veltin Studio's tombstones can be seen lining the upper back wall in this image taken during Medal Day 2019 when playwright Kathryn Hamilton opened her workspace to interested visitors.

Here on MacDowell’s Legacy pages, we got a bit ahead of ourselves…. An argument could be made that we should have begun these “legacy” pages with some context for one of our oldest traditions, the tombstone.

Dating back to our beginnings, or at least to 1909 as noted below in a MacDowell-themed strip by comic artist and writer Larry Feign (11), artists have signed and dated wooden tablets in the studios at the end of each residency. Every studio has a collection of these plaques, known as “tombstones” for their shape and the implied intimations of mortality. Famous names inspire many and, we’ve been told, intimidate others to such a degree that they’ve stashed the boards in stacks beneath their beds. Whatever their reaction, each artist before departing adds their own name and dates with pencil, pen, paintbrush, collage, carving knife, or burning tool. In this way, all MacDowell Fellows leave an indelible trace that will remain a visible part of MacDowell’s history. 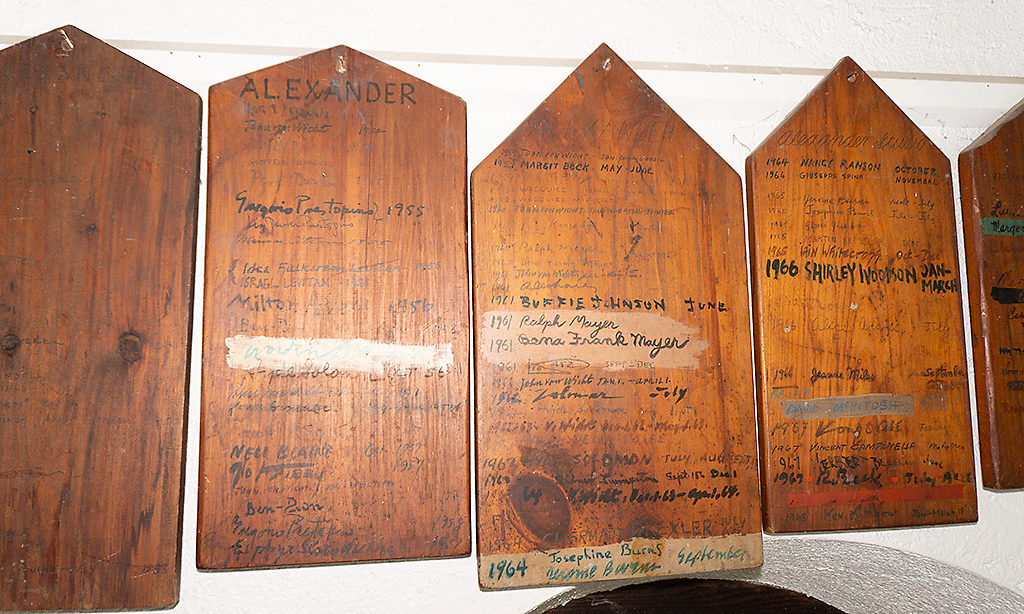 Look closely at these tombstones from Alexander Studio, and you'll recognize some names of note.

In a some of the studios, the backs of the tombstones have been more elaborately adorned with an anonymous message to a future or past Fellow, a collage, or, in Mark Dean Veca’s (98, 19) case, an actual painting (see below).

Read a blog post by writer Rashaan Meneses (13) called “@ Mansfield Studio” wherein she reflects on some of the great names she recognized in her studio. Another blog post by composer Steven Snowden (17, 19) reflects on the historic weight of one name in particular on the tombstones in Watson Studio.

These tablets stand as historical markers of more than a century of creative practice at MacDowell and this Legacy series just scratches the surface by paying tribute to a few of the more than 8,500 incredible artists who have left their name on one of the fabled boards since 1907 … or 1909.

Scroll down for more excellent Fellows’ quotes about our tombstones and a neat animation taken from a short film by Fellow George Griffin (75, 81). 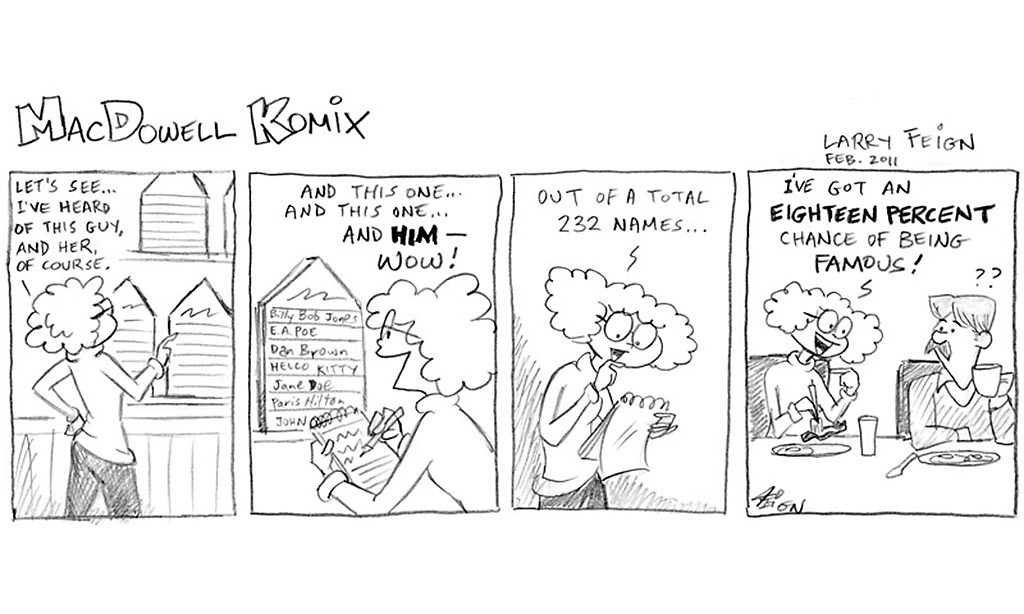 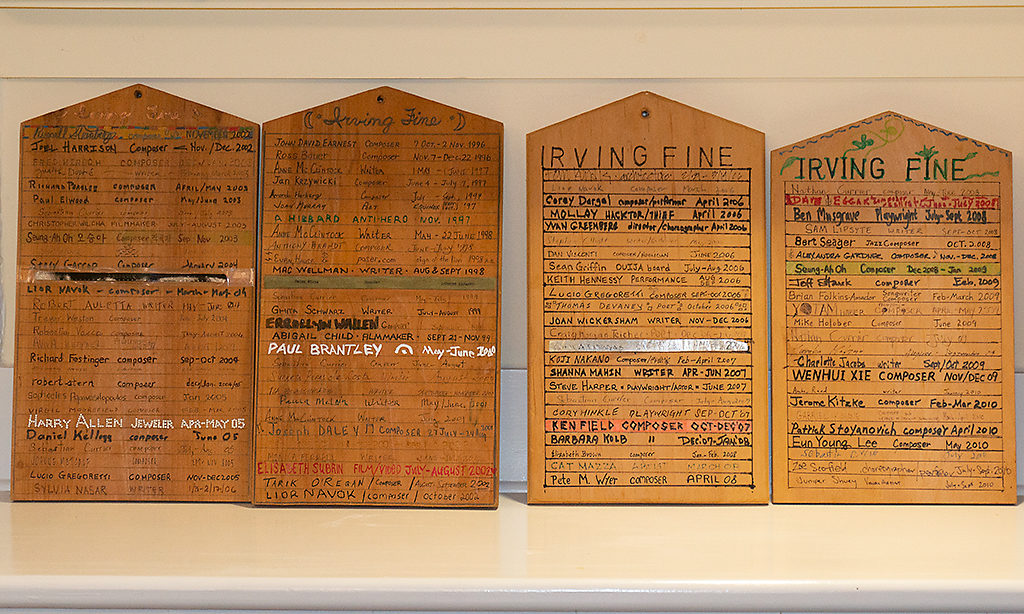 Some Fellows who stayed in Irving Fine had fun with describing themselves, such as poser, jeweler, and thief. 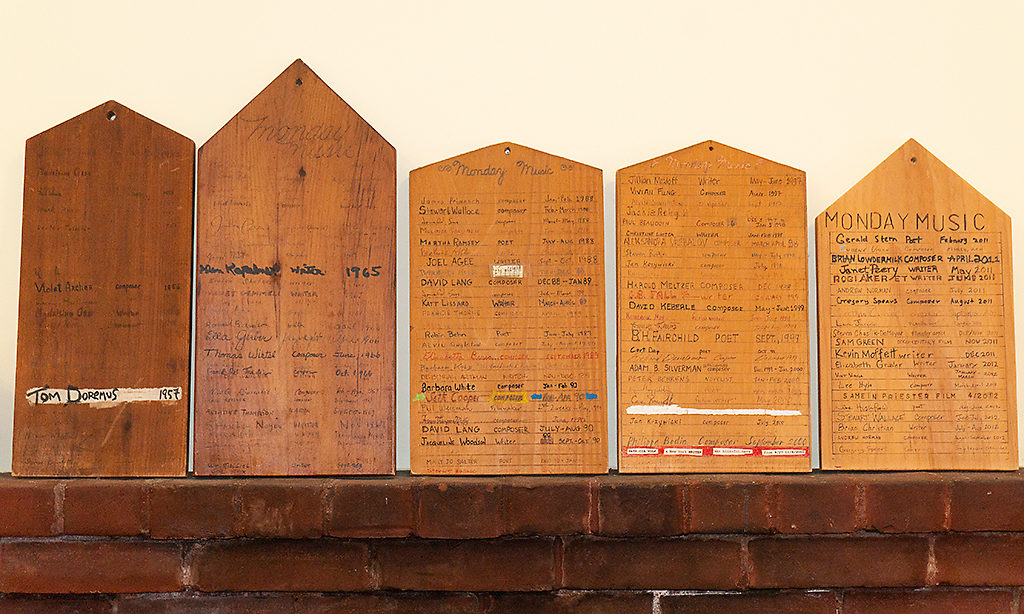 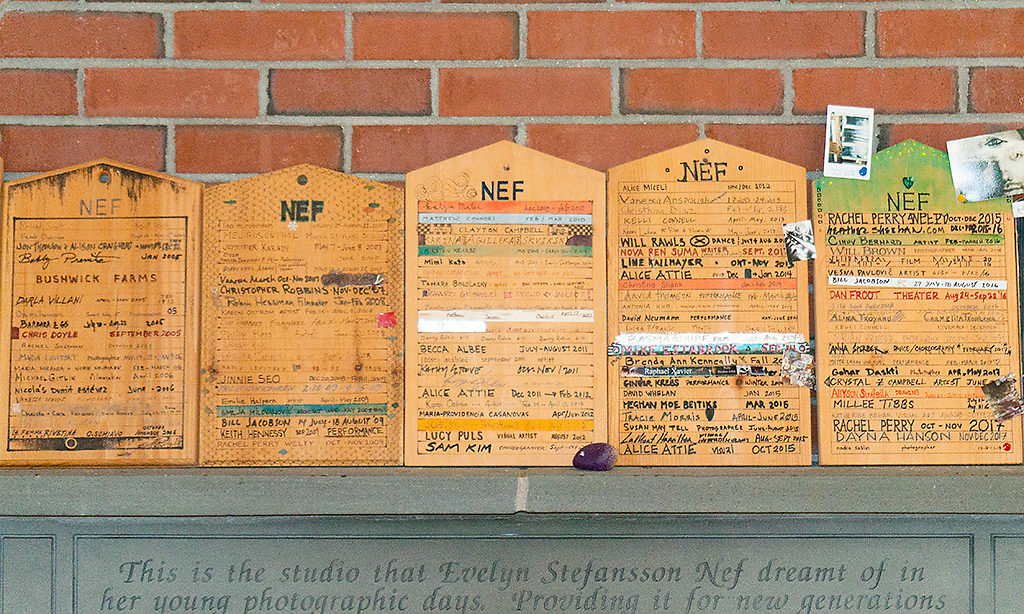 The Nef Studio tombstones offer a colorful counterpoint to some in older, more established studios. 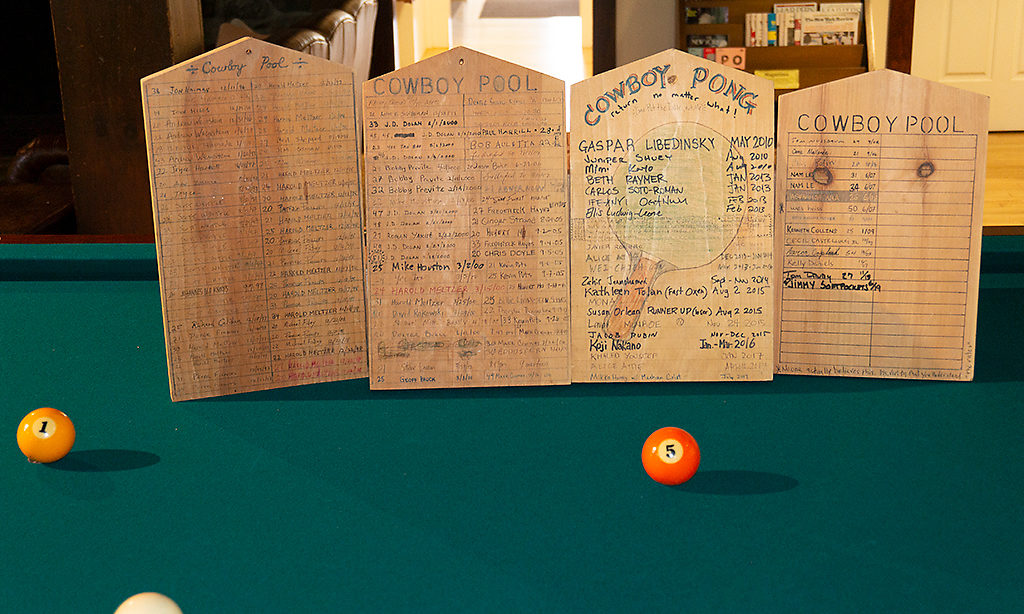 Even Edward MacDowell's billiards table (and the accompanying ping pong table) have their own tombstones. 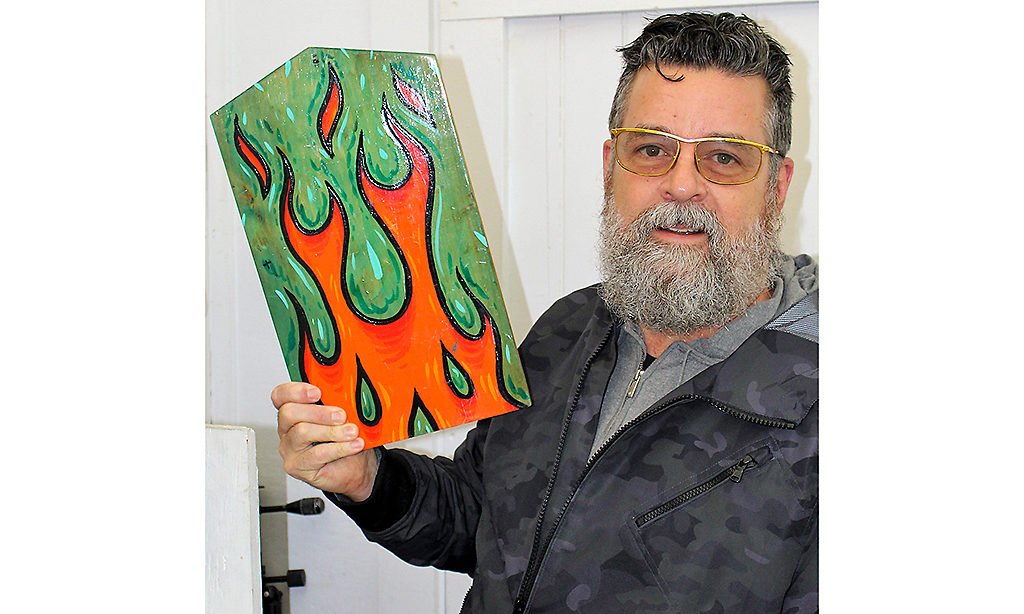 On a studio visit with artist-in-residence Mary Temple, Mark Dean Veca came across his name on a tombstone of Firth Studio, just as he had inscribed it 21 years before at the end of his first residency, and revealed he had painted the back. (photo by Dan Millbauer)

"On the walls of each MacDowell studio hang wooden plaques on which artists write their names, their disciplines, and their term of residence. These objects are called tombstones, for the very good reason that they function as intimations of mortality. Some of the spidery handwriting is so faded as to be illegible; most of the workers (and their works) have faded into obscurity. The occasional famous name leaps out at you – a mixed blessing, because you cannot help but wonder whether you will be gathered into the company of the famous dead or that larger company of the obscure dead. It's my guess that, although MacDowell is a place in which narcissism is nicely cultivated, most colonists harbor the secret fear that they and their works will not outlast their ballpoint tombstone-inscriptions. Maybe that's why some artists are not satisfied with affixing ‘composer’ or ‘poet’ or ‘painter’ next to their names – there's a regrettable tendency to be coy or cute (in much the same way that people are cute on their telephone answering machines: They desperately need to establish character, personality, presence, and humor in two seconds). Poets – well, one forgives them; they have a hard time in this world – are the greatest offenders.”
– Writer Barbara Grizzuit Harrison (7x 75-87)

“In each cabin are tombstones — some dating as far back as the early 1900s — where each resident who stayed in a particular cabin writes his or her name, dates attended, and title. In my cabin, New Jersey, the title section included a fascinating array: farmer, novelist, composer, musician, architect, and even a few blank spaces. Reading the names of the famous artists who worked in the space I was working in was daunting. For example both writer Ruth Richel, longtime editor of Gourmet Magazine, and Alice Sebold, author of The Lovely Bones, had worked at this same desk.

“Composer … Alvin Singleton summed up what became my own attitude toward the tombstones: ‘I’m aware of it, but I just have to do what they did. I have to sit here and do my work.’ ”
– Writer Amanda Bastoni (08)

“Posterity may or may not be kind to those of us who come and go here. But for a few weeks, you allow us all an equal opportunity, and the privilege of putting our names on posterity's ‘great leveler,’ the MacDowell tombstones."
– Composer Jeffrey Cotton (89, 91, 02)

And, with his tongue at least partially planted in cheek, former Chairman of the Board Michael Chabon talked about the tombstones during his 2015 Medal Day welcome address:

“Now, I know that the tombstones are meant to be the record of a continuous active creative human presence in a studio, going all the way back, in some cases, to before the First World War. But again, I can't help it; I dwell. I'm a dweller. I have always found the tombstones to be a powerful reminder of the oblivion that awaits me and, in all likelihood, the work that I've come to MacDowell to struggle with.”
– Writer Michael Chabon (14 x 96-17)

For the first time in MacDowell’s history, non-Fellows added their names when the residency, which had closed in March 2020 to help fight the spread of COVID-19, welcomed medical workers from Monadnock Community Hospital to stay in the studios while they worked to fight the pandemic.

The clip above was taken from George Griffin's (75, 81) contribution to an hour-long series of short films entitled "Seasons of MacDowell" created for our centennital in 2007.
see other legacy posts