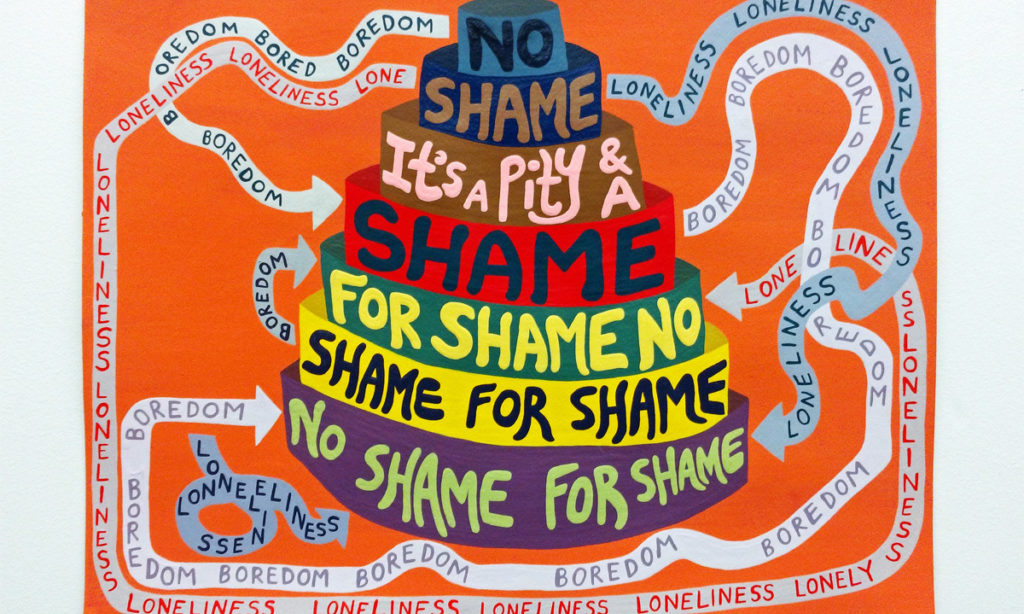 Becky Brown works between painting, drawing, sculpture, and installation using found images, objects, and texts. Both 2D and 3D compositions depend on a logic of density, excess, and squishing things together. Diverse materials inform her practice, including pre-modern poetic forms, current headlines, photo-journalism, and discarded appliances. Her installation No, said the Fruit Bowl, in the kitchen of an abandoned home on Governors Island, was described by Ken Johnson in his New York Times review as “machines vomiting as if in a bulimic’s nightmare.” Her work has been exhibited at venues including The Drawing Center, NYC; Dixon Place, NYC; NARS Foundation, Brooklyn, NY; Fort Gondo Complex for the Arts, St. Louis, MO; and Religare Arts Initiative, Delhi, India.

In residence, she completed the large mixed media work Community Has Its Limits in the form of a six-foot-high 35mm slide sheet. It is part of her ongoing series reconfiguring found images and text into oversized calendars, notebooks, maps and other functions increasingly replaced by digital substitutes. It will be part of her solo exhibition at Arts + Leisure Gallery, NYC, scheduled for October, 2018. Also this year, she received a “Bronx Recognizes Its Own” Award from the Bronx Council on the Arts. She'll also participate in the group exhibition “Saunter Trek Escort Parade... (S.T.E.P….)" at Queens Museum and Flux Factory, NYC. She has been an artist-in-residence at Millay Colony, Yaddo, and Saltonstall Foundation, among others. Her art criticism has been published in Art in America and The Brooklyn Rail. She received her M.F.A. from Hunter College and her B.A. from Brown University.

Cheney Studio was given to MacDowell by Mrs. Benjamin P. Cheney and Mrs. Karl Kauffman. Like Barnard Studio, Cheney is a low, broadly massed bungalow. Sited on a steep westward slope, its porches are supported on wooden posts and fieldstone with lattices. Although it still retains its appealing character, the original design of the shingled building…