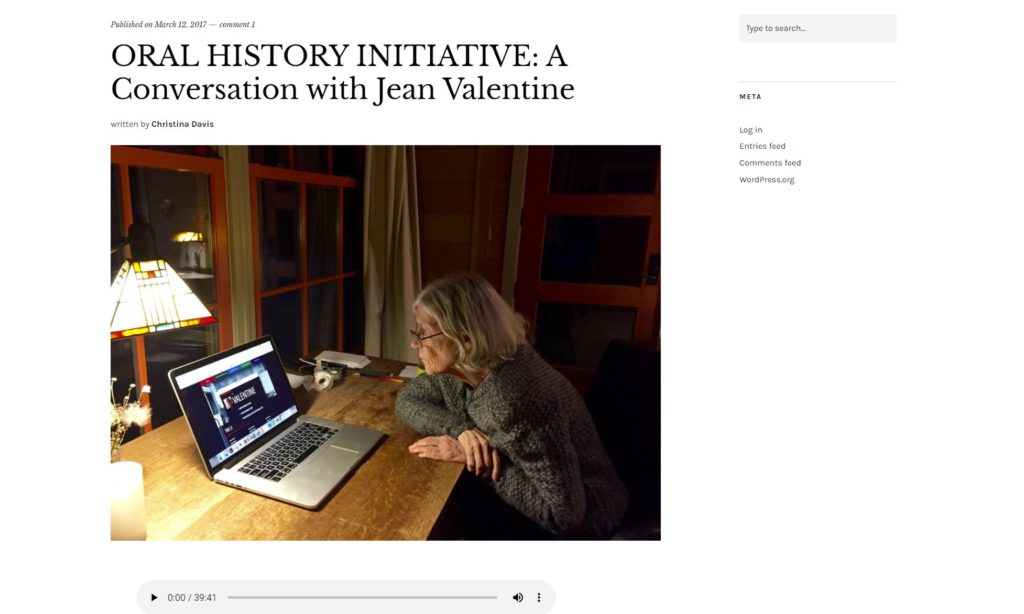 Conversation with Jean Valentine - Click to read and listen

Jean Valentine (1934-2020) was born in Chicago, earned her B.A. from Radcliffe College, and lived most of her life in New York City. She struggled to get her poems published and almost gave up on the pursuit, and as a married mother of two, she sent an untitled manuscript to Yale and ended up winning the Yale Younger Poets Award. The collection she had submitted as her application was published a few months later as Dream Barker and Other Poems (1965). She gave a reading at Harvard after Dream Barker was published and returned the next year on a Bunting Fellowship and studied with Robert Lowell.

Valentine went on to publish 13 more collections of poetry over a six-decade career. Her 13th book of poetry was Shirt in Heaven, published by Copper Canyon Press in 2015. Door in the Mountain: New & Collected Poems 1965 - 2003 won the 2004 National Book Award for Poetry. In 2017, she won Yale’s prestigious Bollingen Prize for American Poetry.

Jean was the State Poet of New York for two years, starting in the spring of 2008. She received the 2009 Wallace Stevens Award from the Academy of American Poets, and also received a Guggenheim Fellowship and awards from the NEA, The Bunting Institute, The Rockefeller Foundation, The New York Council for the Arts, and The New York Foundation for the Arts, as well as the Maurice English Prize, the Teasdale Poetry Prize, and The Poetry Society of America's Shelley Memorial Prize in 2000. In 2014 she was given an award for exceptional accomplishment in literature from the American Academy of Arts and Letters.

She taught at Sarah Lawrence College, the Graduate Writing Program of New York University, Columbia University, and the 92nd Street Y in Manhattan.

"Looking into a Jean Valentine poem is like looking into a lake: you can see your own outline, and the shapes of the upper world, reflected among rocks, underwater life, glint of lost bottles, drifted leaves. The known and familiar become one with the mysterious and half-wild, at the place where consciousness and the subliminal meet. This is a poetry of the highest order, because it lets us into spaces and meanings we couldn't approach in any other way."
— Adrienne Rich

The Helen Coolidge Mansfield Studio was donated by graduates of the Mansfield War Service Classes for Reconstruction Aides. Helen Mansfield helped found the New York MacDowell Club. The small, shingled frame structure with stone foundation was originally fronted on the west side by a neat white picket fence and gate, a garden, and a stone pathway…