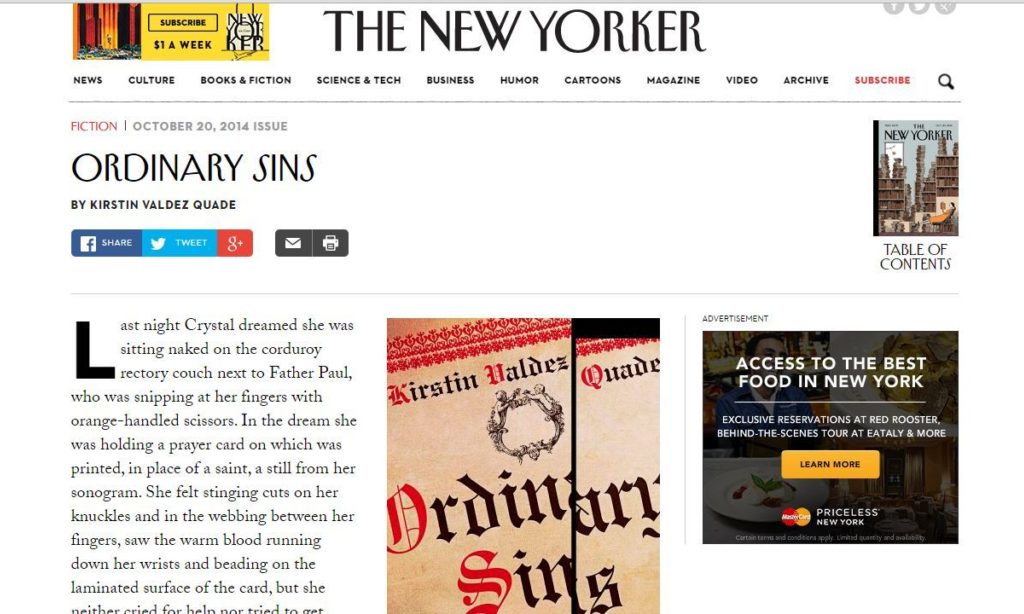 Ordinary Sins - Tap to Read
Night at the Fiestas, interview

Kirstin Valdez Quade is the author of The Five Wounds (W. W. Norton, April 2021), which was selected for Roxane Gay’s Audacious Book Club, the Barnes & Noble Book Club, and BuzzFeed’s book club. It is a most anticipated book of 2021 by O, the Oprah Magazine, The Week, Electric Lit, and The Millions. Her story collection, Night at the Fiestas (W. W. Norton), won the John Leonard Prize from the National Book Critics Circle, the Sue Kaufman Prize for First Fiction from the American Academy of Arts and Letters, a “5 Under 35” award from the National Book Foundation, and was a finalist for the New York Public Library Young Lions Award. It was named a New York Times Notable Book and a best book of 2015 by the San Francisco Chronicle and the American Library Association. Kirstin is the recipient of the John Guare Writer’s Fund Rome Prize from the American Academy in Rome, a Rona Jaffe Foundation Writer’s Award, a grant from the Elizabeth George Foundation, and a Stegner Fellowship at Stanford. Her work has appeared in The New Yorker, The Best American Short Stories, The O. Henry Prize Stories, The New York Times, and elsewhere. She is an assistant professor at Princeton.

Funded by Alpha Chi Omega, a national fraternity founded in 1885, Star Studio — built in 1911–1912 — was the first studio given to the residency by an outside organization. To this day, Alpha Chi sorority pledges learn the story of Star Studio and its role in supporting American arts and letters. Beginning as a nicely proportioned…