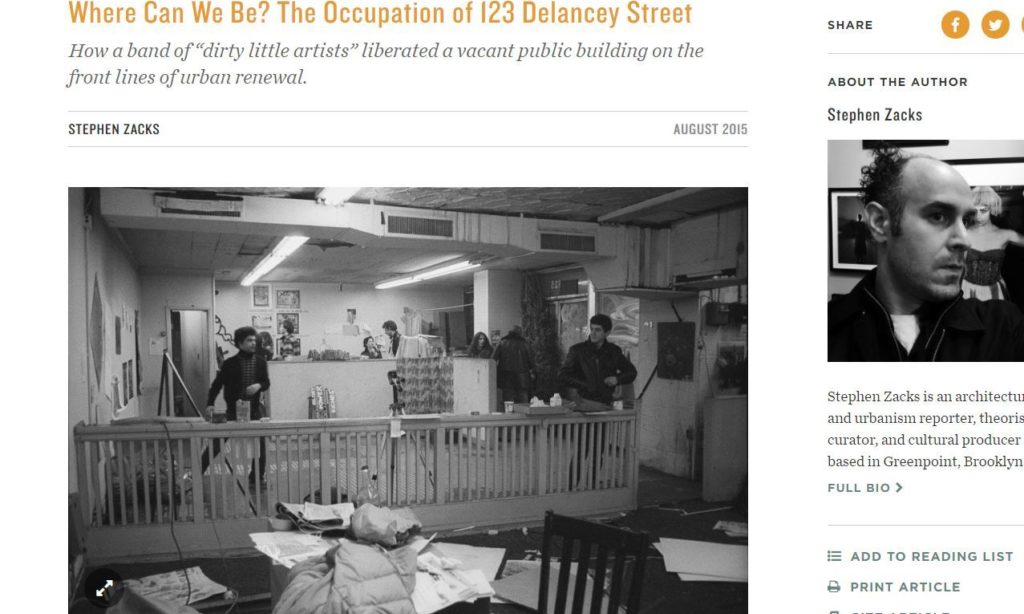 Where Can We Be? The Occupation of 123 Delancey Street - Read a chapter of Stephen's new book

Stephen Zacks is an advocacy journalist, architecture critic, urbanist, and organizer based in New York City. A graduate of Michigan State University and New School for Social Research with a bachelor’s degree in interdisciplinary humanities and a master’s in liberal studies, he founded Flint Public Art Project in 2011 and serves as president of the nonprofit Amplifier Inc., a platform for socially engaged art and design in under-served cities. He has published in The New York Times, Village Voice, Art in America, Abitare, L’Architecture d’Aujourd’hui, Dwell, Architectural Review, Oculus, Landscape Architecture Magazine, Architectural Record, the Architect’s Newspaper, Brownstoner, Curbed, Monocle, Blueprint, Mic, Print, and Hyperallergic, and previously served as an editor at Metropolis. His projects have received awards from ArtPlace, Creative Capital, Warhol Foundation, National Endowment for the Arts, Graham Foundation, MacDowell, and the New York State Council on the Arts. He co-directed the Collective: Unconscious performance space on the Lower East Side from 1996 to 2002.

The yellow clapboard New Jersey Studio, located on a grassy, sloping site, was funded by the New Jersey Federation of Women’s Clubs and built as an exact replica of Monday Music Studio (1913). The studio’s porch rests on fieldstone piers that increase in height as the ground slopes to the west. Like Monday Music Studio, New Jersey…