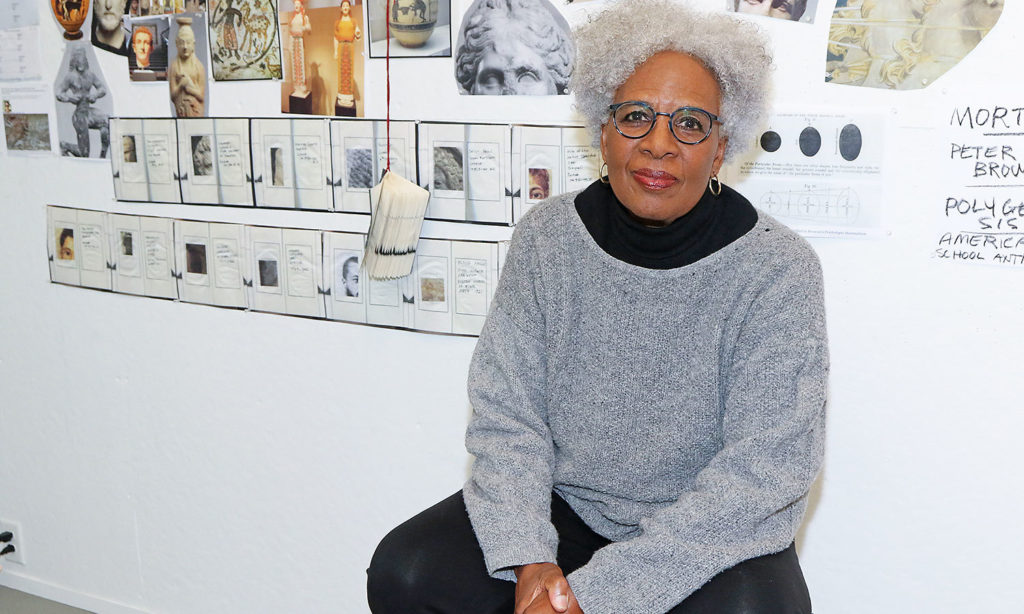 Nell Painter worked on a series of pieces for a project that will ultimately become an artist's book with the working title Were the Ancients White? in Eastman Studio in 2019. (portrait by Joanna Eldredge Morrissey)

At MacDowell with James Baldwin, to Stop and Do Nothing In Order to Start Anew

I drove up to MacDowell from New Jersey in early November 2019 with only a beginning of an idea of what I wanted to do. My 2010 book, The History of White People, was still attracting readers. My main point in that book was the constantly changing nature of racial identity, of white identity. Now Trump, campaigning as a white savior and governing as a feckless autocrat, was validating my point and forcing millions of Americans who had thought of themselves as individuals to discover their race. Within Trump’s translucent appeals to white resentment lodged the identity of whiteness, an identity Nazis and white nationalists had, inconveniently, already loudly claimed. Before Trump, most white Americans had assumed that only other Americans, black Americans first and foremost, had race and all its disabilities. Now I needed to talk about white identity in the time of Trump. Luckily for me, MacDowell offered a perfect place to begin a new project, a place to begin again, to stop and do nothing in order to start a project anew.

My first attempt took me off in a direction I didn’t want to go, but in the freedom of Eastman Studio, this was hardly disastrous. Having tacked my wrong-way images and maps on my wall, I took them down and set them aside. Starting again with a new wall installation, I confronted a question that white nationalists had made newly relevant by appropriating the greatness of Greece and Rome by claiming the ancients were white — in the sense that we use racial terms. Were the ancients white? How to answer that question? Go to the library, log on to the internet, and call up images of the ancients from the Metropolitan Museum of Art.

The library at MacDowell offered shelter, resources, helpful librarians, and, of course, comfortable spots for curling up with the internet. Even better, since November 2018 the library has been named for James Baldwin, a three-time MacDowell Fellow in the 1950s. Sitting on the bench by the door to take off my boots, I admired a gorgeous pastel portrait of an innocent young Baldwin by his life-long friend, the painter Beauford Delaney.

I reckon Delaney drew Baldwin in about 1950, as the portrait is in a warm-cool palette of complimentary colors that Delaney also used in a pastel self-portrait made when he was in residence at Yaddo in the early 1950s. Delaney had met young Baldwin in New York City in the 1940s and went on to depict him countless times in several mediums, as his process changed from pastels to oils applied in increasing thickness. Friends in New York, Baldwin and Delaney stayed physically and emotionally close until Delaney’s death in a Paris insane asylum in 1979. Their shared abodes included not only Paris, where we easily picture the two of them at work, and St. Paul de Vence in southern France, where Baldwin lived for the last 18 years of his life and Delaney made a second home, but also Istanbul. I had not associated Baldwin with Istanbul until last September, when I had visited the city that had created the odalisque, a figure playing a pivotal role in my history of whiteness.

During the 2018 dedication of the James Baldwin Library, novelist Florence Ladd, a MacDowell Fellow (and my old friend from Cambridge), spoke of meeting Baldwin and becoming his friend in Istanbul in 1962. That was a crucial year for Baldwin and for those of us heeding his words. It was in 1962 that Baldwin published “The Creative Process” as well as the prophetic “Letter from a Region of My Mind” in The New Yorker. The latter anchored his electrifying The Fire Next Time (1963) and landed him on the cover of Time magazine as a warning to Americans to open their eyes or lose their democracy.

Baldwin completed The Fire Next Time in Istanbul, a city he called home for the better part of a decade. In Istanbul, he said he felt the freedom to begin again, stop, and do nothing in order to start a project anew.

In the last few years, Baldwin’s comments in “The Creative Process” about the role of the artist in society have inspired a good bit of discussion. The most often-cited comment says,

A society must assume that it is stable, but the artist must know, and he must let us know, that there is nothing stable under heaven.

. . . so have we, as a nation, modified or suppressed and lied about all the darker forces in our history. . . . whoever cannot tell himself the truth about his past is trapped in it, is immobilized in the prison of his undiscovered self.

These two quotations — on the artist’s unsettling of stability and the need for the truth about the past — strike me differently. In 1962, the society in question would have been American and, as Baldwin often extended his analysis, Western European — the world that thought of itself as “Free” and white and superior because of its whiteness. That was more than half a century ago. Nonetheless, I’m with Baldwin when it comes to the pernicious effects of lies, as Baldwin often said, the lies that the U.S.A. is a white nation whose Manifest Destiny did not entail Native American genocide and enslavement. The concept of stability, however, is harder for me now.

Besieged as I am — as we are — by lies and liars and chaos and whirlwinds of devilish tweeting, I falter. The concept of stability looms up beside me as a lost attribute of the bygone era of . . . President Obama, a stability of truthfulness and respect for human rights. These ideals nudge me in the direction of stability. Even as I recognize the shallowness of such feeling and its utter inability to stand up to even a second look, with my boots under James Baldwin’s brown-green-violet gaze, I feel too jerked around for an unqualified embrace of instability, artist-inspired or not.

Against lies, however, I mount the barricades and return to “The Creative Process” to open my arms wide and embrace Baldwin’s other assignment to “the artist.”

The artist cannot and must not take anything for granted, but must drive to the heart of every answer and expose the question the answer hides.

This exposure, this uncovering of questions too long obscured by facile answers, is precisely what artists at MacDowell and elsewhere have been undertaking while stuck in this wrecked epoch. Desegregation still has so far to go. But on stages, in movies, in books of fiction, nonfiction, and poetry, in music, in performances of every scale, the questions fly. The questions are not all political or social or historical, as James Baldwin might have wished. But they are questions that could not have been heard widely in the early 1960s – Baldwin’s time of lies.

Baldwin had to leave the United States, even leave Western Europe, to seek a peaceful workplace in Istanbul, to hurl back the jeremiad of The Fire Next Time that set a fire of its own. Istanbul doubtless encouraged his softer focus on the role of the artist in “The Creative Process,” where his words — “lies,” “questions” — perfectly capture the unsettling needed to keep Americans from destroying themselves.

In the last decade or so, artists have been posing a series of questions about who gets to speak and be heard by taking on the old towering answer: It has to be a white man. Beyoncé’s Lemonade, Lin-Manuel Miranda’s Hamilton, and Glenn Ligon’s 2019 Istanbul Biennial exhibition, James Baldwin: From Another Place, are just three of the more visible and celebrated contemporary works of art challenging the lies Baldwin warned us of in 1962. By querying, even bypassing, the images and performances of white supremacy and highlighting lies about American history, today’s artists are asking not only the questions behind conventional answers, they are posing a bountiful new series of questions that are taking us into a world of new answers.

If we can survive the nastiness and lies of our current politics, we will make it through to a less dangerous, less frightening time when we can welcome artists’ destabilizing society without fearing for our lives. In 1962, Istanbul gave Baldwin a safe haven among artists to finish a masterwork in a time of turmoil. Today, as it has for over a century, MacDowell invites artists to follow their imaginations freely, to begin a new project, to begin again, to stop and do nothing in order to start a project anew.