Introducing a Bold Vision for a Twentieth-Century Fellowship 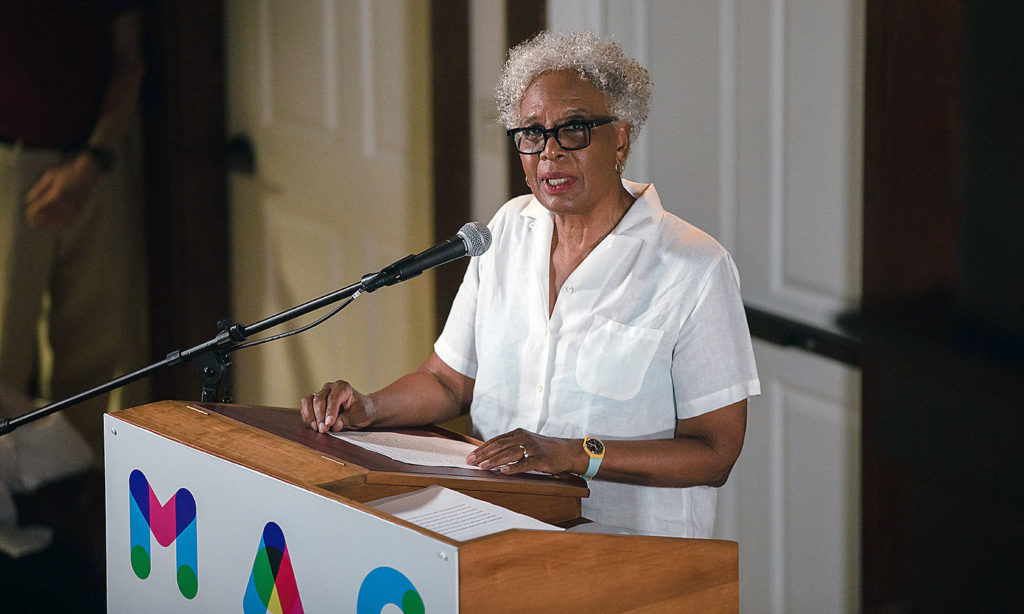 Greetings, in person, and with profound thanks from MacDowell in Peterborough, New Hampshire, celebrating Medal Day, this time, an honoring that the Coronavirus delayed from 2020. We honor Rosanne Cash, who’s the first woman to win the Medal in composition. Her honor breaks tradition in honoring a woman composer, though Edward MacDowell was a composer, and his widow Marian, the motivating force behind the establishment of MacDowell as an artists’ residency, was a woman. Rosanne Cash’s medal reflects changes occurring right now in U.S. and MacDowell history, changes that began before 2020, but that the events of 2020 galvanized.

When I say galvanizing events of 2020, I’m not referring to MacDowell’s choice of Rosanne Cash as a Medal winner. She was selected before COVID 19, before the massive demonstrations against the murder of George Floyd and White supremacy, and in support of Black Lives Matter. And before the events of 2020, MacDowell embraced a dedication to diversity, equity, inclusion, and access, a dedication that continues today and tomorrow.

Along with recognition of systems of inequality that reach into heritage institutions like MacDowell, we also recognize the needs to change how we operate going forward.

I need to point to the ongoing DEIA work within the MacDowell staff, reaching from Peterborough to New York and, soon, beyond. But today I want to look backwards, to the 20th century, and forward to the possibility of repair. Repair also goes by the name tikkun and also goes by the more emphatic term reparations, which I want to embrace as Madame Chairman of MacDowell, and even though most of us would not, initially, associate a need for reparations with our beloved MacDowell, which today is proudly multicultural. But, looking backwards, we must admit that today’s MacDowell, like the values of today’s U.S.A., have not always prevailed.

Though established in 1907, MacDowell did not admit African American artists until the mid-1950s. James Baldwin, for whom the library is now named, was one of the first African Americans to come to the MacDowell Colony in 1954. At MacDowell Baldwin wrote part of Notes of a Native Son, his 1955 collection of essays taking on issues of race and civil rights in America. Baldwin always called MacDowell his “favorite sanctuary for writing,” a sentiment I would repeat, adding, “for drawing.” Like Alice Childress in 1965, Benny Andrews, Myoko Ito, and Audre Lord in the 1970s, several other prominent artists of color came to MacDowell before the turn of the 21st century. But their numbers remained small, and they sometimes felt tokenized, even as they appreciated MacDowell’s legendary “freedom to create,” and even though MacDowell’s sole criterion for Fellowships is “excellence.”

Here’s my MacDowell reparations proposal: Every year we provide one or two “Twentieth-Century Fellowships” to artists born before 1968 who are still practicing. They belong to a segregated generation, a generation when unspoken barriers of racism, sexism, and ableism hindered artists’ careers in the 20th century. What would be the criteria? I suggest two: being born before 1968 and persisting in one’s artist’s practice.

Rosanne Cash and I both would qualify. (laughter) We could be “Twentieth-Century Fellows.” While she and I both managed to keep working in our fields, we can point to artist peers whose careers racism, sexism and/or ableism hindered, artists whose bona fides equal — or even exceed — our own. Rosanne, born into country-music royalty, has written eloquently of her own self-doubt as an artist, finding encouragement in the art of Sister Rosetta Tharpe. If even Rosanne Cash needed encouragement, what of the 20th-century artists without royalty or without Sister Rosetta Tharpe? Even though MacDowell can address the former ways of the world of art patronage only on a very limited basis, MacDowell’s symbolic reparation for past discouragement can make an eloquent statement about a new future. We cannot move more fully forward unless we acknowledge habits of the past that still influence how we see, and how we think about excellence in art.