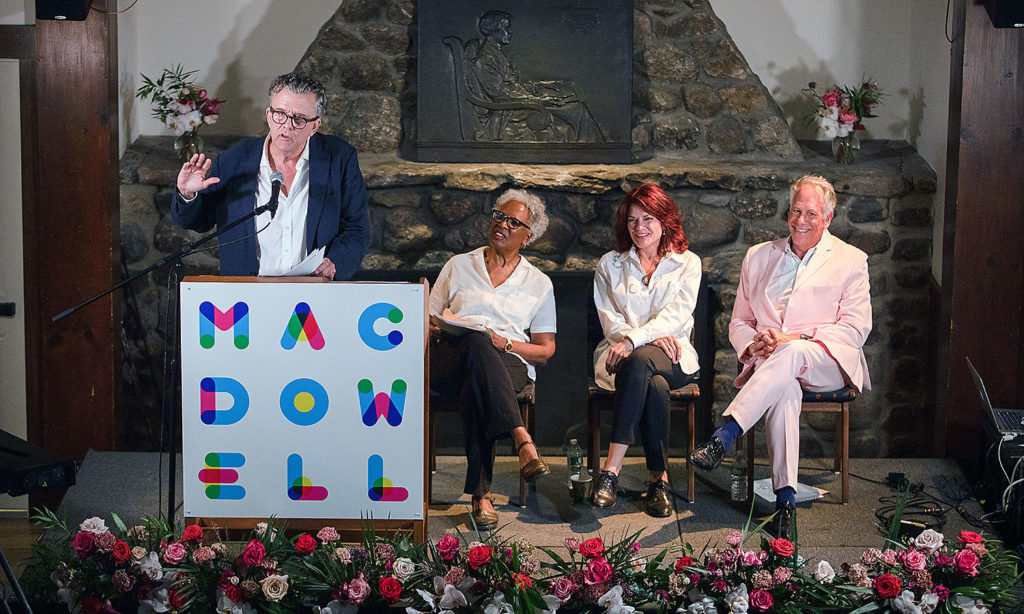 Author and co-creator of public radio's Studio 360, Kurt Andersen introduces the 61st Edward MacDowell Medalist Rosanne Cash on July 1, 2021, calling her "artistically ambitious ... with a body of work of an incredible breadth and depth."

It is my great honor to be here as well, and as Philip and Nell said, my friend, Rosanne Cash, is the 61st MacDowell Medalist. I also noticed because I have this obsessive pattern-recognition quirk, she’s the 16th composer. If I were a numerologist I would find magic in this appointment. As has also been alluded to, the company of MacDowell Medalists that she now joins is so illustrious –– just thinking about the composers: Aaron Copland, Samuel Barber, Leonard Bernstein, Steve Reich, Sonny Rollins, and Stephen Sondheim, to name a few.

Roseanne Cash the first female composer … yes (applause) to get the MacDowell Medal, but is the 14th woman to be a MacDowell Medalist. By the way, if anyone doubts that the late 1960s and early 1970s were indeed a great lurch forward for progress –– of the ten MacDowell Medals awarded in the decade starting in 1967, half went to women! So the place had set a model for its future already.

Including Lillian Hellman, the writer. It was the very next female MacDowell Medalist, the writer Mary McCarthy, who around that time went on a network TV talk show and said of Hellman, quote: "Every word she writes is a lie, including 'and' and 'the.' " Good times.

I’m truly honored to be here because of the illustriousness of the previous presenters! So Rosanne, thank you for letting me be the Mike Nichols to your Edward Albee, the George Plimpton to your William Styron, the Elizabeth Hardwick to your Joan Didion.

I was tempted just to swipe the text of this from a different arts prize awarded recently to a different beloved and important American singer-songwriter, that is, as the Nobel Committee said of Bob Dylan in 2016: “for having created new poetic expressions within the great American song tradition.” Rosanne Cash has done that.

By the way, synchronicity, “Girl from the North Country,” the great Bob Dylan song ––

Rosanne Cash and her father both recorded that song … one of them with Bob Dylan.

But Rosanne sings her own songs, mostly. Because she’s a magnificent writer of songs. Which is why we celebrate her today.

We writers who don’t set our words to music or sing them, seldom call ourselves “artists.” Whereas every musical performer is automatically referred to as an “artist.” But Roseanne Cash? Actually, unequivocally the real thing.

Each of those genres is a hybrid of previous genres, so her songs, all her songs, constitute a new hybrid. Which is really just another way of saying: Rosanne Cash is an American artist, who knows the histories of each tributary of that musical river she navigates, from the Delta, from Appalachia, from the Celtic lands.

It’s a funny thing about country music. When I was a little kid in Nebraska, it didn’t have any particular political tint. But then came the Vietnam War, the antiwar movement, and the backlash to the antiwar movement, and the exploitation of that movement by a president, and in 1969, as protests –– some of you here may remember –– were peaking, Merle Haggard’s anti-protester anti-hippie “Okie From Muskogee” became the #1 country song in America. And the rest is history.

In fact, I think, over the next generation the music of country music also started to change … and that change was analogous to what was happening to America in general: that is it started to lose connections to its roots, becoming slick and shiny and all about money, beset by a new pseudo-conservatism that wasn’t conserving a lot of the best old spirit, starting to become a kind of grotesque, mummified version of itself.

Meanwhile, back then, brand new country music star Rosanne Cash remained true to her inherited musical legacy, to its best deepest parts … and did not go with the flow politically either.

Something I realized contemplating her life: she is like a fictional character, this wonderful heroine invented to embody America, the protagonist of a fantastic novel … fantastic in both senses, wonderful and also … kind of implausible.

• a father who grows up poor on an experimental New Deal homestead picking cotton near the Mississippi River and becomes an iconic musician, a mother –– the granddaughter of Sicilian immigrants made good, and the great-great-granddaughter of an enslaved Black woman

• as a child our heroine moves west with her family from Memphis to southern California – to Johnny Carson’s old house! –– and then she becomes a musical star herself

• act three or Chapter 23: she gets too artistically ambitious for her record label, her father tells her, “Screw ‘em. You belong in New York” where she finds a perfect romantic and professional partner, does her best work yet and –– after dramatic setbacks, one involving brain surgery! –– heads toward a happy ending.

And, I just wanted to say, her brain problem, which is called a chiari malformation, I thought ‘that sounds familiar’ and I looked it up, and I was right, chiari –– in one of her homelands –– means luminous.

But seriously, I can count on no more than two hands the living American singer-songwriters as artistically ambitious and fine as Rosanne Cash with a body of work of an incredible breadth and depth.

Her songs are full of beauty and dreamy pleasures but also unflinching pictures of reality and history… and thus of anguish and tragedy. Like all good art, hers is complicated.

And, let me tell you, she works at it. After her early success she trained herself to be the artist she felt was worthy of that success. And she knows what every artist knows –– I’m quoting her now: “I am always a beginner, again and again.”

From her most recent album She Remembers Everything, a title I love. Also, I love the title of the song: “Particle and Wave”:

And then this bridge:

An American Roots song about quantum mechanics! My sweet spot!

In fact, so much of Rosanne’s writing depicts those exquisite dualities –– it’s gorgeous, it’s painful, it’s both.

And along with the existential, cultural allusions and wit. Like in her song “World Without Sound”:

I wish I was John Lennon

Free as a bird

Then all of you who sit and stare

Would hang on my every word….

And the chorus of that song:

And finally, a song she wrote last summer after George Floyd’s murder and the reckonings it inspired called “The Killing Fields”:

There was cotton on the killing fields

it blows down through the years

fills my eyes and ears…

And then this remarkable last verse:

…. goodbye to the killing fields

all that came before you

all that came before me

all that came before us

is not who we are now

Youth may be wasted on the young, but I know for a fact age is not wasted on Rosanne Cash … she is still constantly distilling her time alive into wisdom … but also she, as imperfect as all of us, in her work lets us know she knows she’s imperfect … which confirms the wisdom.

Rosanne and I are both writers. We both creatively feed on history and dream of time travel. We both left the provinces for New York City (if I’m still allowed to call Nebraska and California and Tennessee the provinces). We are both lucky in many ways. I am lucky to know her. American culture is lucky to have her.

Speaking of New York and luck: another hero of mine, E.B. White, in the hot, hot summer of 1948 in a hot room at the Algonquin Hotel in New York City, wrote a great essay called “Here Is New York.”

White in that piece says there are “three New Yorks” –– natives, commuters, and the “New York of the person who was born somewhere else and came to New York in quest of something. The greatest is the last –– the city of final destination, the city that is a goal. It accounts for New York’s high-strung disposition, its poetical deportment, its dedication to the arts.

The settlers give it passion. Each embraces New York with the intense excitement of first love, each absorbs New York with the fresh eyes of an adventurer. Strangers who have pulled up stakes somewhere and come to town, seeking sanctuary or fulfillment or some greater or lesser grail. It can destroy an individual, or it can fulfill him, depending a good deal on luck. No one should come to New York to live unless he is willing to be lucky.”

“Willing to be lucky” –– I love that phrase. I have quoted it many times over the years, including at the two wedding ceremonies I have officiated. And I recommend it for those purposes. (laughter) But only now, preparing for this, I realized it could be a great line in a song by Rosanne Cash.

I want to end with another great remark by E.B. White: "All that I hope to say in books, all that I ever hope to say, is that I love this world." I am with him. And I have a feeling that Rosanne Cash is too.

Thank you very much.

Read Board Chair Nell Painter’s welcome to the audience in Bond Hall on July 1, 2021