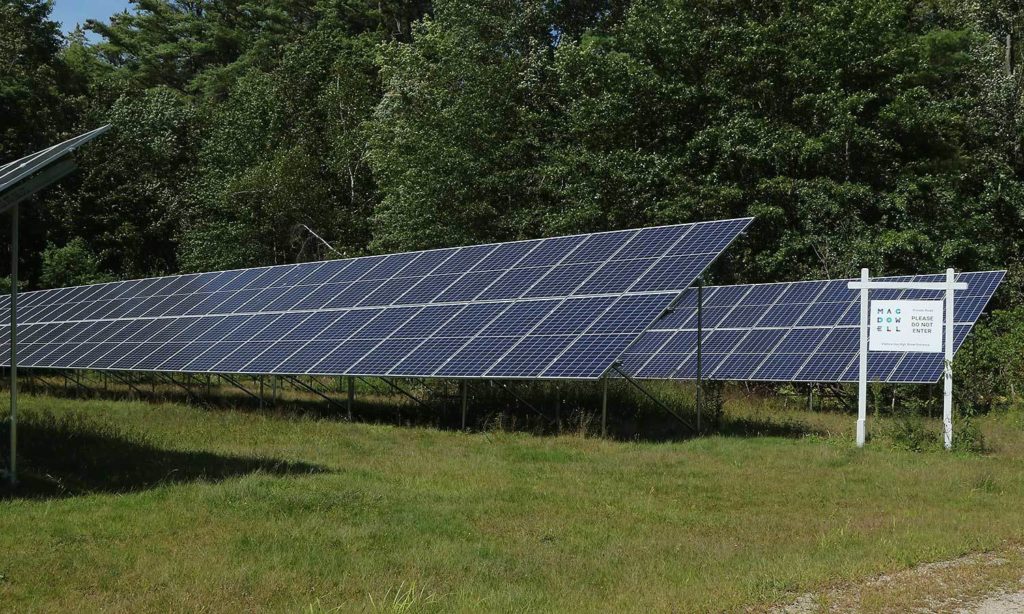 In January of 2020, MacDowell's second solar array along its southern property line on Union Street in Peterborough started generating power. As a result, the artist residency program now gets all its electrical needs, and then some, courtesy of the sun. (Joanna Eldredge Morrissey photo) 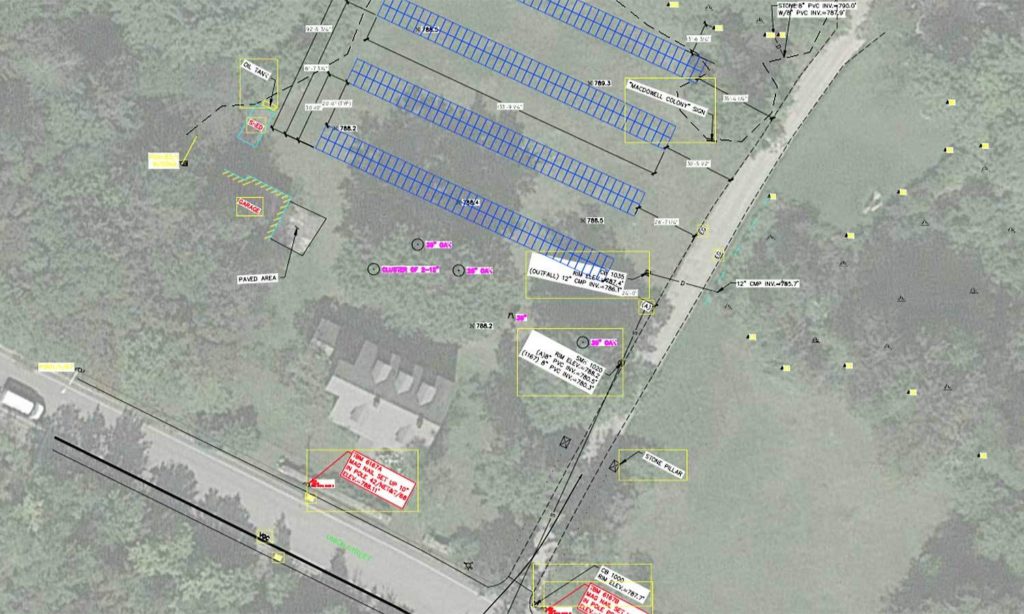 This plan shows where the array exists relative to Union Street and the former "Lower House," which has been razed. Landscaping and new plantings are planned for the spot. (image courtesy of ReVision Energy) 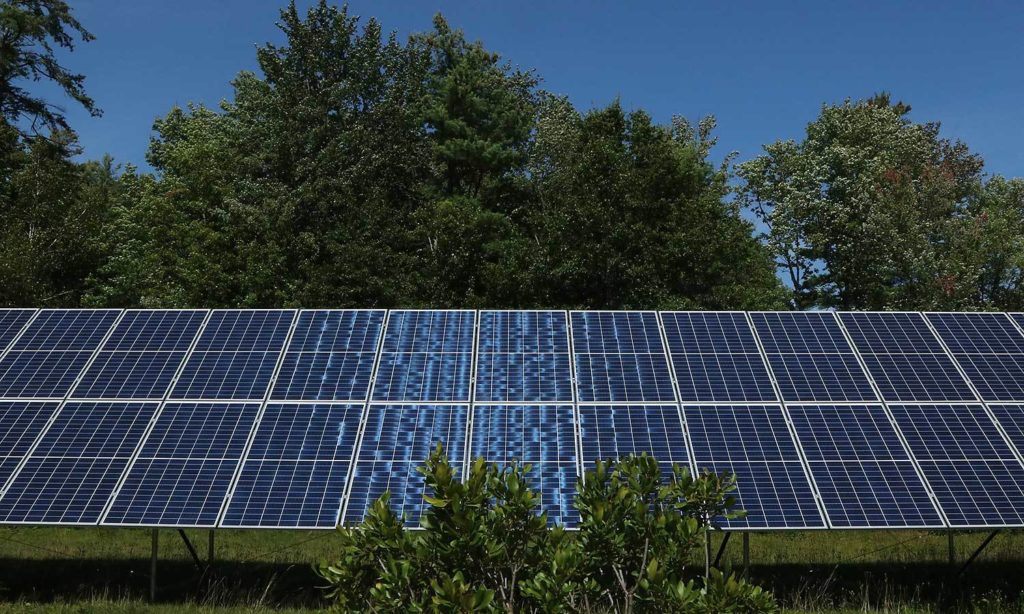 In January of 2020, a new solar array of 320 panels arranged in four rows was activated after having been installed at the southern edge of MacDowell’s property in November and December. In combination with MacDowell’s first array (2016), the second now means the artist residency program generates about 10% more electrical power than the organization consumes over the course of a year. And while renewable solar energy fulfills all electric needs on the 450-acre, 39-building property, more work remains to be done in reducing the organization’s carbon footprint.

Though it can produce more electrical power than is used on the property in a year, MacDowell remains connected to the grid, sending any electricity that is left over on sunny days back to it where it is used by other consumers. MacDowell receives credits on its electric bill for this net-metered generation and uses power from the grid on cloudy days.

The panels, installed by ReVision Energy of Enfield, NH, produce 131.50 MWh of electrical power annually, the electricity consumed by a typical refrigerator over the course of 200 years. When added to the 186,000 kWh produced annually by the first array, harnessing the sun’s energy for lighting, heating, and cooling on the property is estimated to prevent nearly 161 tons of carbon emissions from being released into the atmosphere each year. This conversion to solar electric power is part of MacDowell’s long-term strategy to reduce carbon emissions and become more sustainable.

More than a dozen studios have been renovated since 1995, the design priority of each equally divided between maximizing insulation and creating ideal working conditions for creative artists. Preventing heat loss through roofs and windows has steadily decreased MacDowell’s total fossil fuel consumption. Sheldon Pennoyer Architects of Concord, NH, was engaged in 2007 to re-envision the building then known as Colony Hall, the single largest building on the property and its biggest energy consumer. The converted barn houses administrative offices, a large kitchen, dining room, and gathering space for artists-in-residence. During the 2008-2009 renovation, attic insulation was quadrupled and the primitive fuel-oil boiler was replaced with a wood pellet boiler as specified by Froling Energy of Peterborough, NH. The wood pellets, a renewable energy source, are produced locally from sawdust and other wood-production byproducts.

“MacDowell’s path toward energy sustainability is being realized in three overlapping stages, beginning with the lowest hanging fruit: first, by preventing energy waste through insulation and weather-proofing; second, by adding photovoltaic arrays on site to generate renewable energy,” said David Macy, MacDowell’s resident director. He added, “and we are still early in the third phase of eliminating fossil fuel use for heating the studios by replacing them with electric heat pumps.”

So far, three studios have been converted to electric heat pumps: Delta Omicron, Eastman, and Mansfield. In winter, the heat pumps extract energy from exterior air and move that warmth into the building. In summer, moisture and heat energy are extracted from interior air and vented to the outside.

MacDowell has also been taking many small steps, like switching to LED lighting in the library and studios and replacing old refrigerators with newer, more efficient units.

“In 2015, the fuel-oil furnace in Eastman studio was replaced with a heat pump, and its incandescent fixtures were replaced with LED lights. After the renovation, the annual uptick in electricity consumption cost less than a single tank of fuel,” said Macy.

The first solar array at MacDowell came online in early 2016 and was financed by IGS Solar. The latest array was financed by a group of New Hampshire investors who believe in green energy. In both cases, MacDowell signed a contract promising to purchase all the electricity produced by the array at a rate below the public utility’s. This arrangement allows the investors to access tax incentives unavailable to nonprofit organizations. When the tax incentives sunset five years after installation, MacDowell has the option of purchasing the arrays outright. With this goal in mind, MacDowell has begun looking for environmentally committed donors to underwrite the purchase.