Reflections on Shitty Performance Art, Crisis, and Isolating Ourselves Intentionally After Isolating Unintentionally 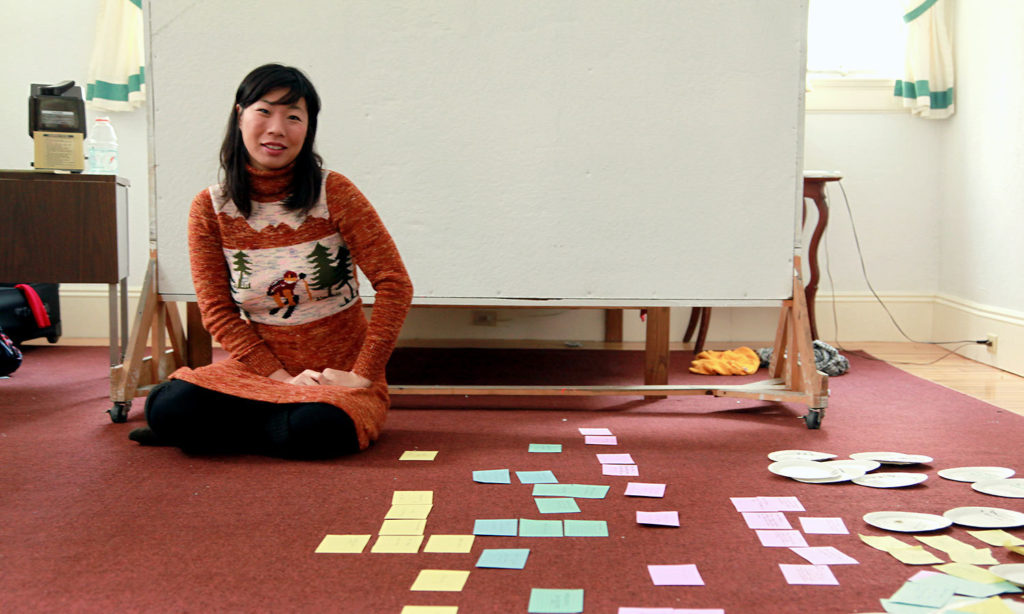 Interdisciplinary artist Kristina Wong worked in the Regina Watson Studio during January of 2010.

This is an essay with starts, variants, losses, but no clear end. Sort of like a pandemic, but not really.

i.
According to Wikipedia: “Endurance art is a kind of performance art involving some form of hardship, such as pain, solitude or exhaustion.” As a performance artist, I describe this pandemic as the worst endurance performance piece ever. Worse than that ritual performance in that storefront gallery where the artist fisted himself while screaming about his absent father before metaphorically crucifying himself. Worse than when that ensemble that met at Cal Arts during undergrad took turns gnawing a 50-pound block of Swiss cheese, while moaning about Manifest Destiny until the cheese was but a grease stain on a rebar pedestal. Worse than the site-specific piece where that naked White woman astral projected and sang about her travels to India in a language she claims is “ancient Sanskrit mixed with jive.”

And while I invented these “worst performance art ever” scenarios, they are composites of real performance art pieces I’ve witnessed during my career. Had I labelled the actual performance art as “the worst,” it would hurt my friends who performed them, and haven’t we all been hurt enough in this pandemic?

ii.
Early in my performance art career, long before I had to add “comedian” to my title (because “performance artist” was scaring away even my three most loyal fans), and long before I made “talky” solo theater shows, I made a lot of obtuse, abstract, and torturous performance work. One of my first professionally presented performances was in November 2001 when I was 23 years old. It was “a post- 9/11 response collaboration” called “Mo(u)rning News” (clever eh?) at Highways Performance Space in Santa Monica. The work contained howling, “metaphorical props” like U.S Army grade gas masks, and projections of 9/11 footage on our bodies – because in performance art, you must have projections on your body. While this performance was only 10 minutes long, witnesses claim it was “unending.”

It felt cathartic to perform, but as I learned later from my friends it was “not fun to watch” and “bad.” From what I could gather, it achieved none of my goals of adding meaning, nuance or healing in the aftermath of a national tragedy.

By 2021 standards, it was the kind of stuff that could get me cancelled. And mind you, performance art is the genre nobody gets cancelled from because your five audience members are usually more motivated to flee your show than ruin you on Twitter.

The backlash from my fledgling post-9/11 performance still has me asking, especially as we survive the current trauma: What is my job as an artist after a crisis? Is it to make tragedy palatable? Is it pseudo therapy that helps audiences emotionally process? If artists are a mirror, do we only reflect back what the viewer can handle?

iii.
We’ve all been inside a truly shitty endurance performance art piece for the last 15 months. Four years and six months if you include Trump’s presidency. This pandemic has made Marina Abromovic performing 750 hours of “The Artist is Present” without a bathroom break look like Club Med. In this pandemic-performance-art-immersive-nightmare, we went from watching spectacles to being inside one. Unwilling participants that we are, we’ve been costumed in masks (or no masks, if we’ve decided to play the role of “delusional freedom fighter”). Every breath and interaction within this endurance work potentially sets off a chain reaction that could decimate all of humanity. Social distancing has been like a terrible Ann Bogart’s Viewpoints exercise that only elicits the stage image, again and again that THIS FUCKING SUCKS.

Like the COVID-19 virus that spun off variants, the virus of hate and White supremacy has spun off its own variants and they’ve manifested in police violence against Black bodies, heightened COVID infections in already vulnerable Black and Brown communities, and an uptick in anti-Asian violence. And for this virus of hate, there is no vaccine because Americans at large have yet to recognize how deeply this hate has permeated America’s past and present.

To state the obvious, we are living and surviving a collective trauma right now. I state the obvious because as trauma goes, many Americans seem to be in deep denial about the extent of our collective loss. The denial runs so deep, that some think the only way to survive this loss is to perform as if our run was never cancelled.

iv.
Even before I open my mouth or step on stage, my female Asian American body already performs narratives of immigrant, quiet, submissive, compliant, invisible, over-achieving academic robot, interchangeable, and sexually consumable. Much of the humor in my performances comes from me leaning into how absurd these narratives are as I satirize myself playing them out.

But in this pandemic, the narrative of my body has shifted to include virus carrier, Agent of the Chinese Communist Government, and easy scapegoat for violence. This has made it trickier for me to self-satirize. Trying to implode these narratives by playing into them, risks perpetuating them.

v.
In 2016, I took a stab at writing an absurdist ensemble musical in response to Trump’s election. But even my most satirical and absurd critique of that moment couldn’t outdo the strangeness of real life. Artists and politicians had switched jobs. The politicians create the shock and spectacle that have us questioning reality and we artists now reclaim the space for social change and truth. Standing on a stage saying, Look how crazy the world is wasn’t really telling us anything different than what we were already living.

I decided that if I was going to be run out of a job by politicians-turned-clowns, I would take their job from them. In April 2019, I ran for elected office twice and won a local unpaid seat on my neighborhood council in Koreatown. My show “Kristina Wong for Public Office” is about simultaneously being a performance artist and elected official.

Am I more influential as an artist or politician? Art and politics work hand in hand. Culture shifts and policy changes follow. Elections and politics aren’t too different from performance art. Legislation and votes are often as symbolic as the gestures of art. Politicians are also like performance artists who most people can’t stand, but if they can endure even a slight majority of public appeal, they can hold their platform another term.

vi.
With no prior experience doing relief or garment work, I ran a “Shadow FEMA” out of my living room called the Auntie Sewing Squad during the pandemic. In March 2020, my tour was cancelled and I was deemed “non-essential.” I used the same Hello Kitty sewing machine that I’ve used for sets and props to sew medical equipment for frontline workers. The requests exploded and I took to Facebook to organize a loose collective of volunteers. We thought mask making would be a three-week stopgap. We are still sewing 15 months, 300,000 masks, and 800 volunteers later for communities like farmworkers and migrants at the border who don’t have access to masks or vaccines. More remarkably, the Aunties have evolved into a network of support for each other as we support communities in their survival.

This mutual aid project has felt like an elaborate performance art project informed by my experience in coordinating community members, working with nothing, fighting bureaucracy to make something work. Like endurance art, sewing masks for strangers during a pandemic has been a performance of pain, solitude, and exhaustion.

vii.
What does it mean when artists who’ve already been isolated by the pandemic self isolate intentionally at artist residency programs such as New Hampshire’s MacDowell, situated away from BIPOC populations … and a lot of people needing radical change? Will this make artists go more stir crazy? Will this keep them from the communities they should be impacting? Who gets the privilege of intentional solitude to create art?

As Americans rush toward replicating the world of “normalcy” that got us in this mess in the first place, artists might be the last chance to create the space to process all that’s been lost.

Community based artists who have been drenched in mutual aid, organizing, and activism during the pandemic may need the intentional respite of residencies the most. Now the questions are: Is MacDowell and their ilk ready to host artists who don’t just make work in closed spaces designated for art, but are focused on building community after tragedy? Are they prepared to include art makers who don’t fit the traditional molds? Will the MacDowells of the planet buck the endemic racism and exclusivity of “the art world” to include makers of radical performance? Is MacDowell actually prepared to decolonize (in more than dropping “Colony” from the name) and reimagine how they can incubate radical community art building?

This is the moment we rethink community – during and after tragedy – and use our imaginations to build true democracy.

Kristina Wong was a MacDowell Fellow in 2010 developing her play “CAT LADY.” She’s a performance artist, comedian and elected representative in Koreatown in Los Angeles. In the pandemic she became Overlord of the Auntie Sewing Squad. “The Auntie Sewing Squad Guide to Mask Making, Radical Care, and Racial Justice” is out this Fall from UC Press. Her new solo play born out of this pandemic will premiere in person off-Broadway at New York Theater Workshop in the Fall. www.kristinawong.com