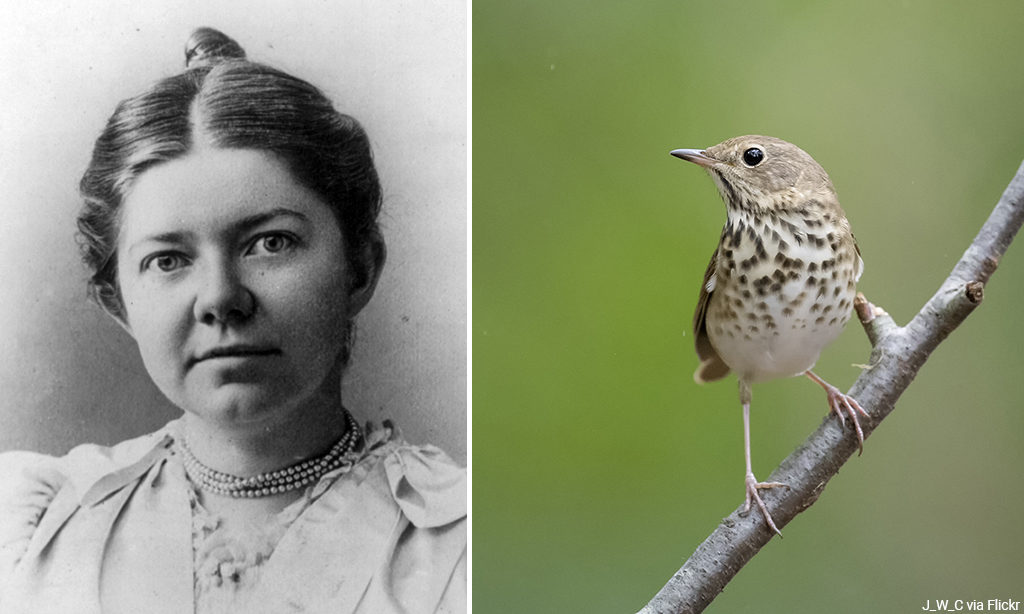 Although Amy Beach came to MacDowell for 18 residencies, it was her very first during which the song of the hermit thrush became a part of her music. In the summer of 1921, the composer became the first to transcribe the bird’s beautiful and melancholy song into musical notes, then incorporated it into two mystical works for piano, both of which evoke the passerine’s ethereal tones, “A Hermit Thrush at Eve” and “A Hermit Thrush at Morn."

“In this music, Beach does for the Romantic piano piece what Ives did for the symphony: express human longings for nature and the divine through a polytonal mix of natural and artful sounds,” wrote critic David Wright in The New York Times in 1998. “Such discourse came readily to these successors of the New England Transcendentalists.” Indeed, the hermit thrush song has been transcribed in both field guides and poetry as “oh, holy holy, ah, purity purity eeh, sweetly sweetly,” and Beach was only the first in series of MacDowell Fellows who were inspired by the bird’s music. 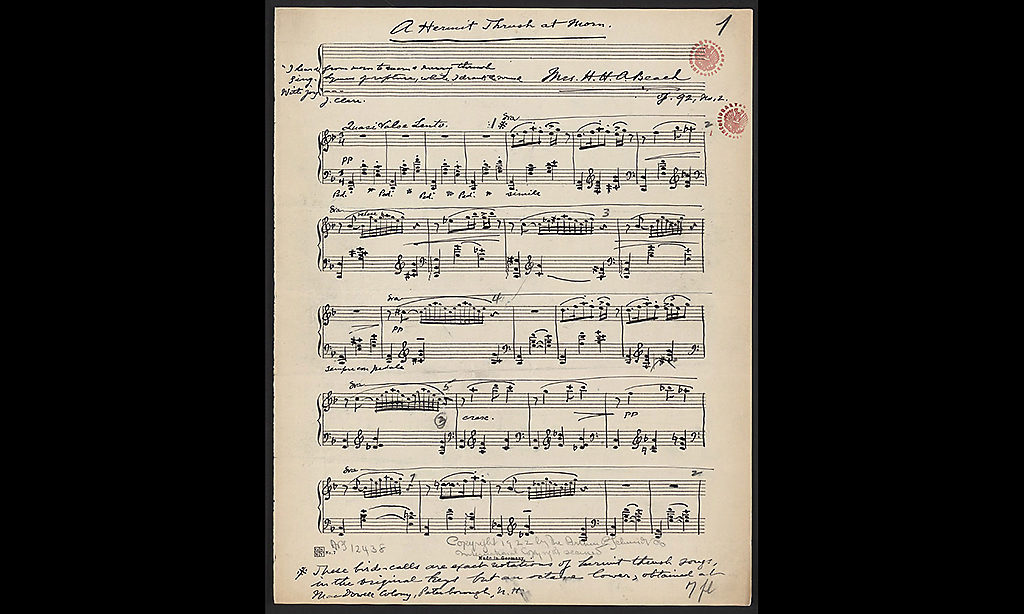 Amy Beach's score for "A Hermit Thrush at Morn." The handwritten note at the bottom of the score reads, "These bird calls are exact notations of hermit thrush songs, in the original keys, but an octave lower, obtained at MacDowell Colony, Peterborough, NH."

Composer, writer, and MacDowell Fellow Emily Doolittle (04, 12), without whom this article would not be possible, writes in a forthcoming essay on the history of the hermit thrush in poetry, music, and the formation of American cultural identity that Beach’s pair of hermit thrush-inspired piano pieces “stand alone in their faithful representation of hermit thrush song in a purely musical … context.” The composer “had cultivated since childhood a practice of transcribing birdsong: as someone with perfect pitch, an unusual ability to concentrate, and a great love of nature (including a preference for composing outdoors), she was especially well equipped to do so….”

Doolittle tells us that at least four other compositions by MacDowell Fellows have been inspired by the hermit thrush, although we’re not certain which were inspired by the bird’s music heard in MacDowell's woods. They include Kate Moore's (12) "The Hermit Thrush and the Astronaut," Elizabeth Brown's (10x 90-08) "Hermit Thrush," and Diane Moser's (08) "Variations on a Hermit Thrush at Eve." Last but not least are a few pieces by Doolittle herself, most recently the second movement of her wind quintet Woodwings. You can look for Doolittle’s essay in the forthcoming anthology Animal Utterances, edited by Francesca MacKenney.

Amy Beach was born in Henniker, NH, in 1867 and before her death in 1944, composed about 300 works and became one of the most admired women in America, including notably by MacDowell co-founder and composer Edward MacDowell. In each of her 18 MacDowell residencies, she worked in Watson, a studio that would provide solitude for the creative efforts of other composers ranging from Leonard Bernstein (62, 70, 72) to Moses Sumney (19). Evidencing the patriarchal culture of her time, she was dubbed the “Dean of American Women Composers” during her lifetime, and she provided invaluable mentorship to many of the younger women composers who came to MacDowell, encouraging many them to call her “Aunt Amy.”Read more about her life and work on her MacDowell Fellows page.

Listen to the song of a hermit thrush, perhaps a descendant of the bird which inspired Beach and other artists-in-residence at MacDowell, recorded in August 2018 at the Pageant Amphitheater at MacDowell.