We know that even in the best of times, art slows us down to concentrate, to engage with our world. My dear poet friend, the late Meena Alexander (MacDowell Fellow 93, 98), said, “writing can work toward a reparation, making a sheltering space for the mind. Yet it feeds off ruptures, tears in what might otherwise seem a seamless, oppressive fabric.” I extend her meaning to art, to your art, in what is both a demanding and yet hopeful time.

This momentous, tragic time of senseless deaths one after the other after the other outrages us and cries out for confrontation and redress. MacDowell Fellows have long been making the art of redress, long before this current round of bloody injustice. MacDowell has made a space here to present the art made by Fellows in protest of previous injustices, for the history of racial injustice is long and needful of redress. Our plan is to present these works online to continue the conversation about social justice through art.

This first round – including film and video, written work, theatrical performance, and visual art – was solicited by invitation to recent Fellows, but the invitation will be going out shortly to all MacDowell Fellows with the understanding that it may seem to impose yet another task on artists who may be in the streets or emotionally drained. This understanding extends particularly but not exclusively to Black and Indigenous Fellows of Color, and to Fellow artists who have suffered personal losses.

Madam Chairman of the Board Nell Painter 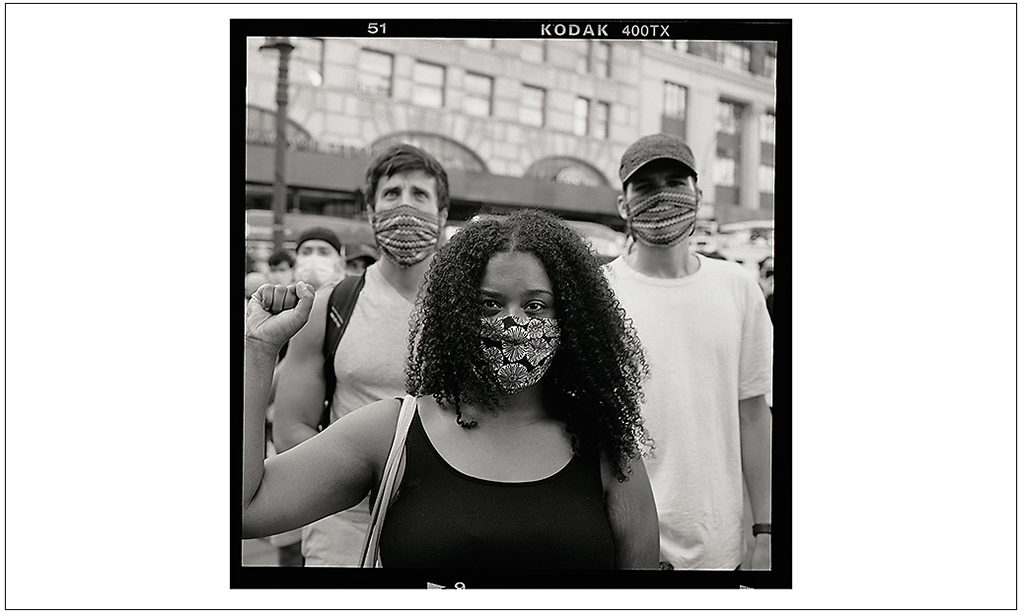 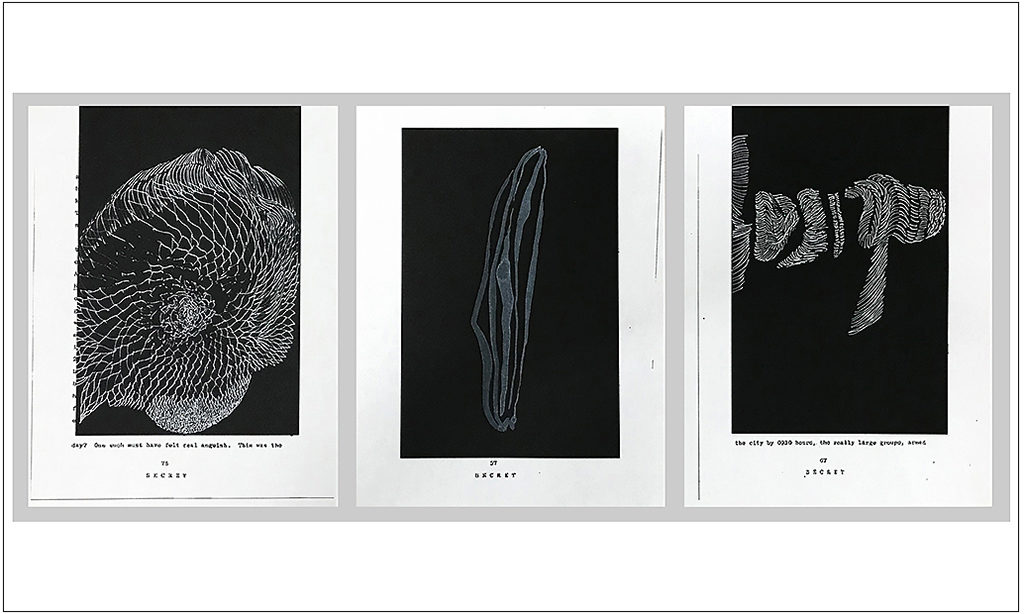 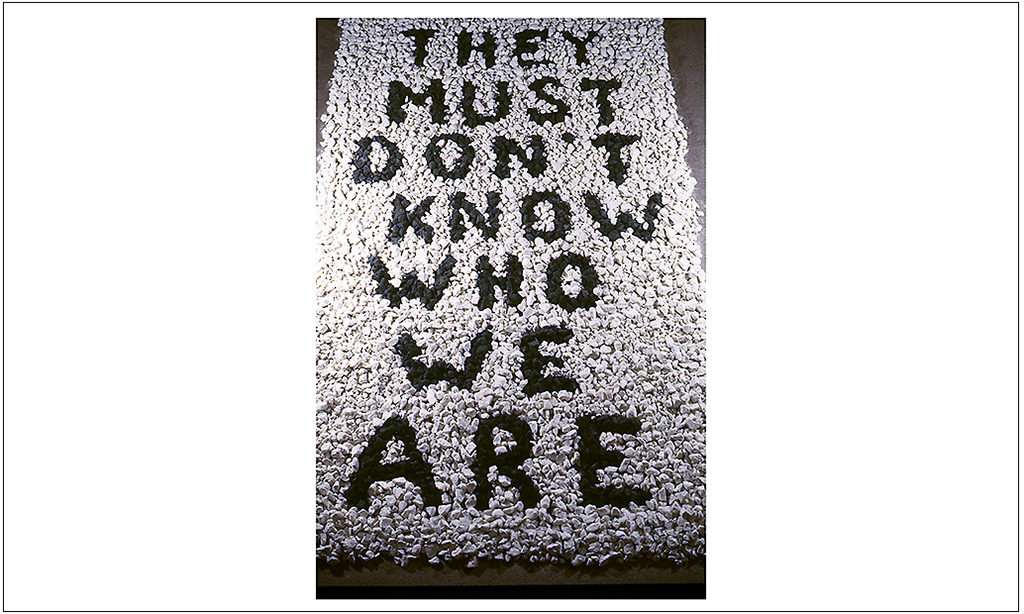 Lava and limestone; 6 feet X 11 feet; 1992; Annette Lawrence (18) visual artist. The piece lies on the floor. It has the proportions of a grave or a bed of hot burning coals. 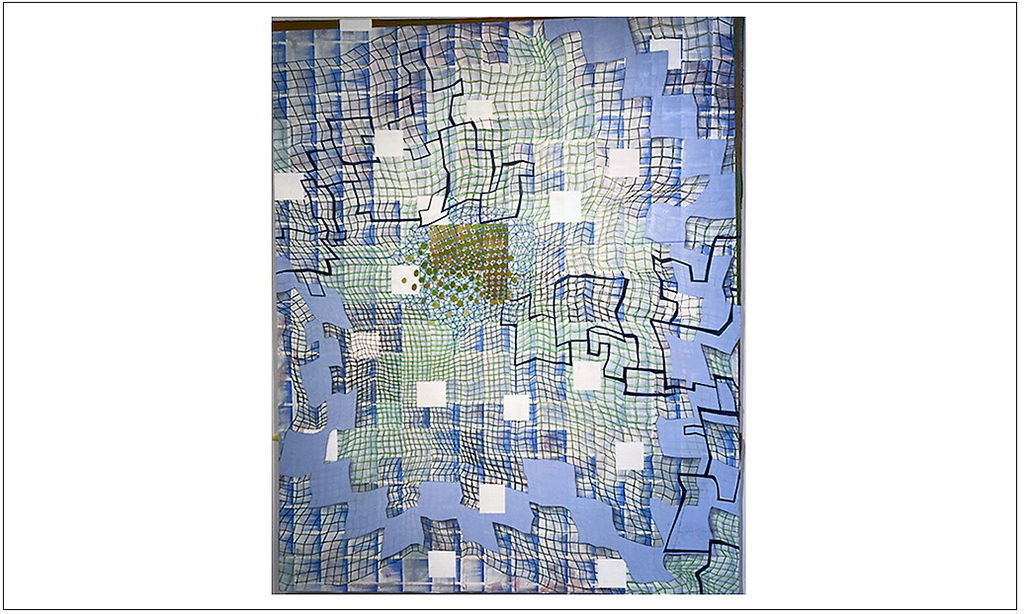 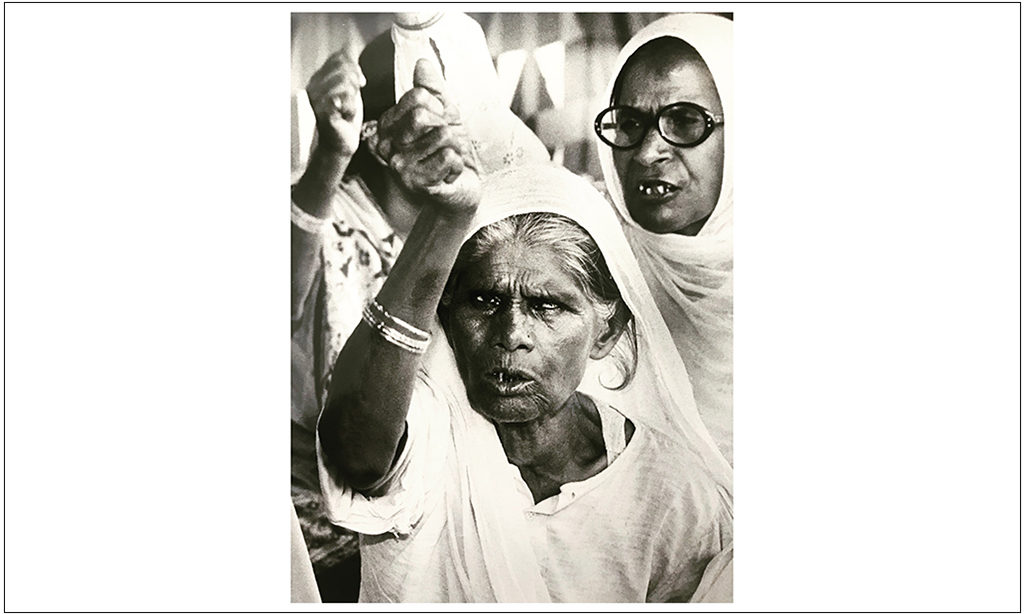 Photographs with an Audience 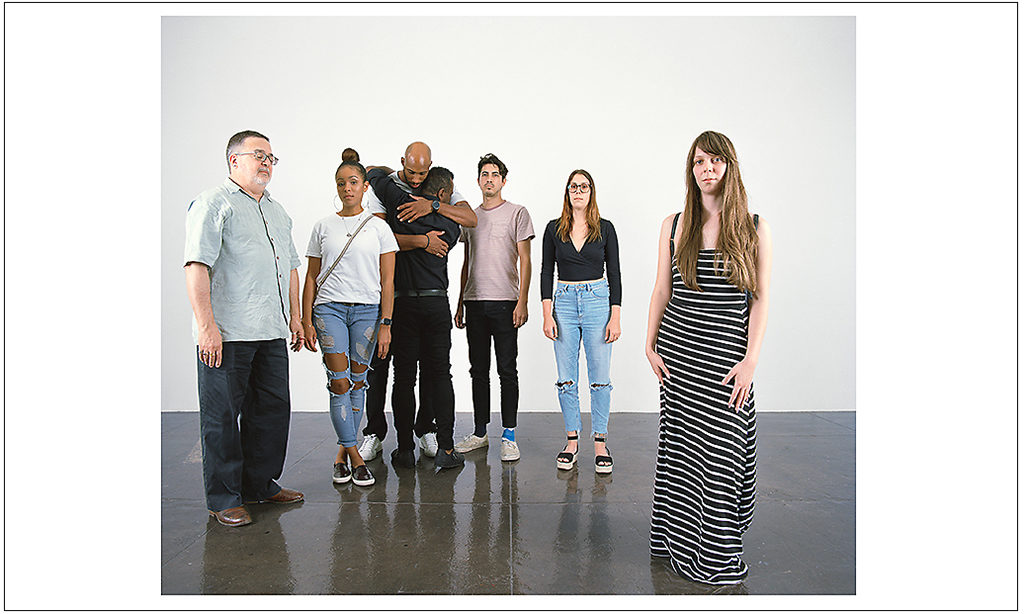 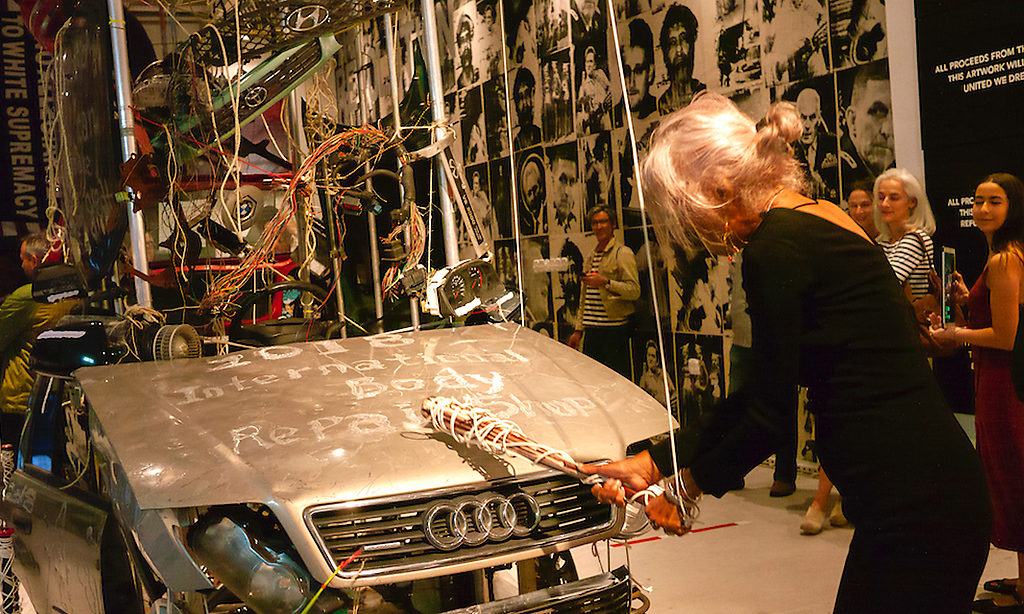 Watch Us, Together We Can Do It 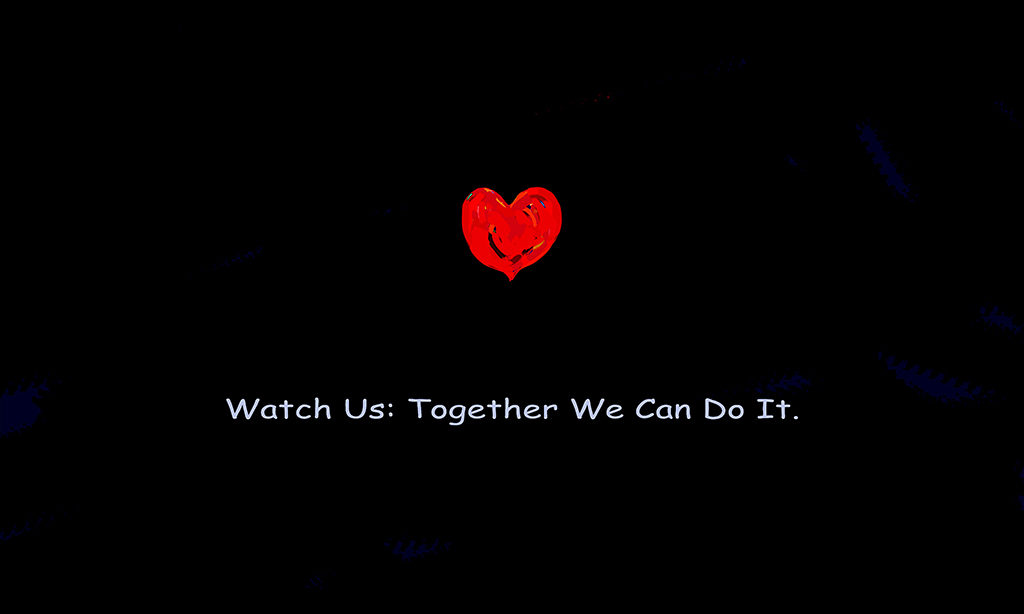 The 3rd Precinct from Afar 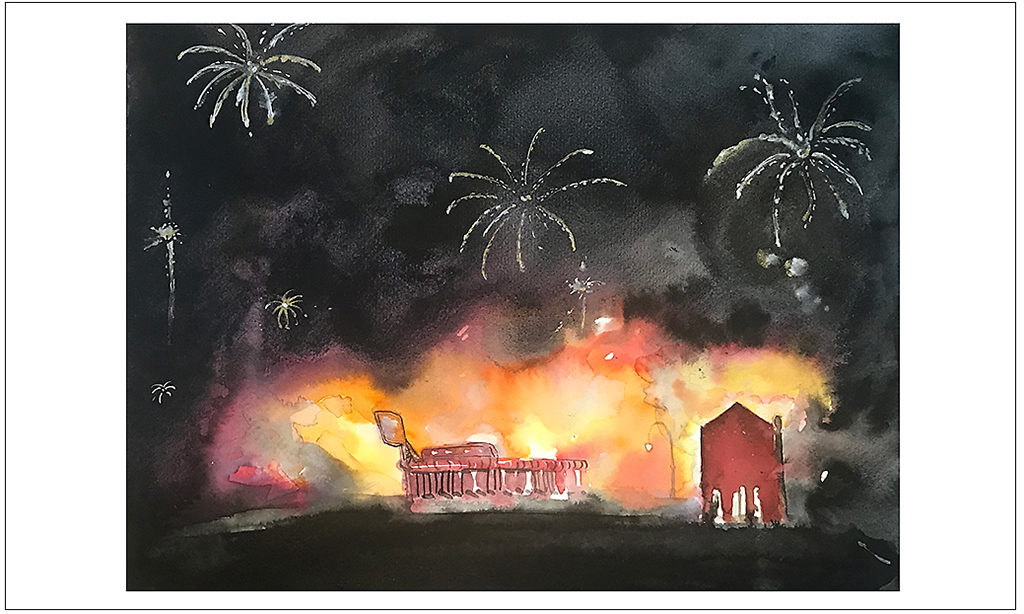 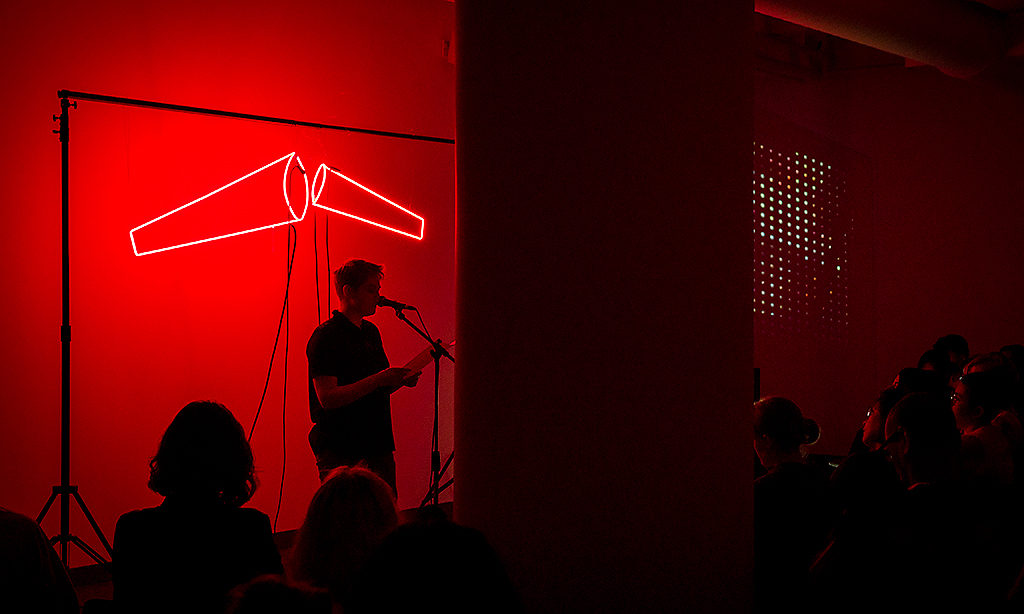 A collaborative performance that began in 2016, one month after the election of Donald Trump. In our fury, we decided to use love as a form of resistance and radical action. Shameless Light is a performance of love letters by women identified queers. Dani and Sheilah ReStack (19), filmmaking. 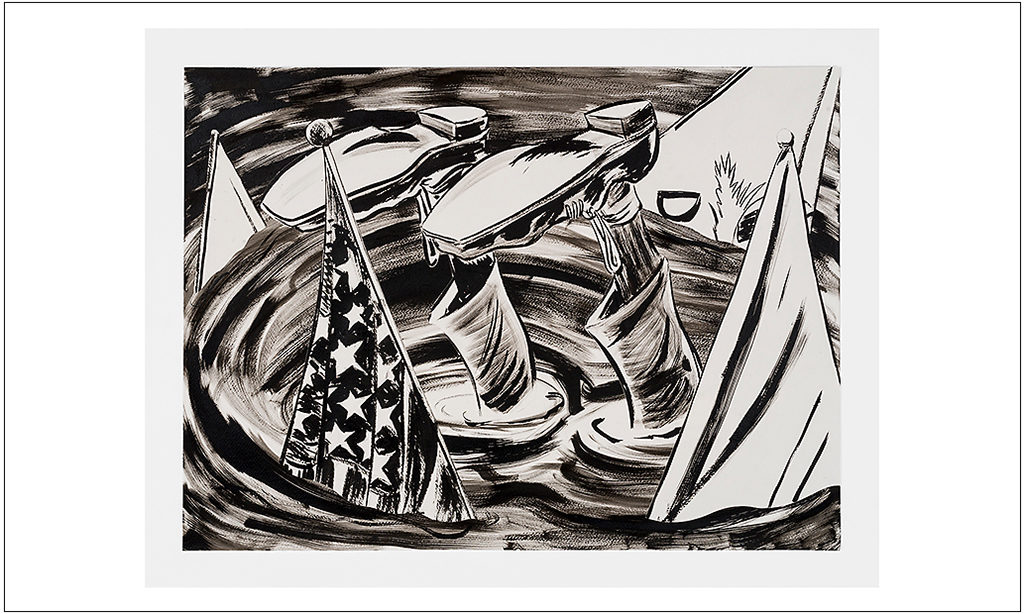 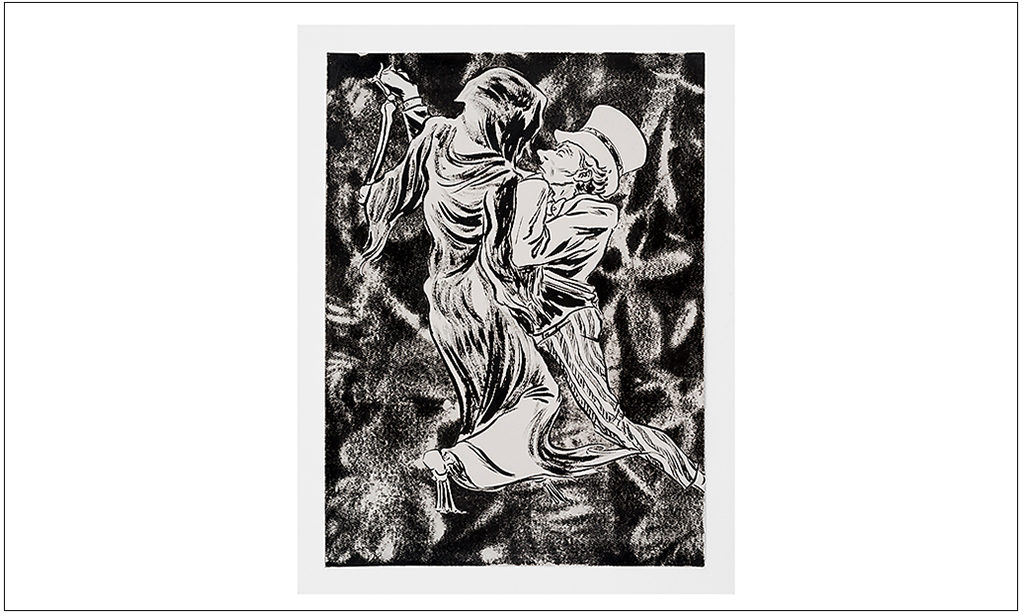 Typically, in a Foundation 2-D course in art school, students are taught about the principle of Resting Space—an empty space where the eye can safely rest, away from the composition's primary focus. This open space allows the viewer to take a break from the subject of the work.

When I conceived of this body of work, including The Lovers (Part 2) and Feeding Grounds (images above), the collective "We" were in the middle of the greatest global pandemic in one hundred years. During this time, We noticed how little We notice anything. We noticed that We had lost the mountains in our landscapes behind smog-covered skies. We noticed that technology wasn't all what We thought it was cracked up to be. We noticed a disproportionate number of black and brown people were dying from this virus. We noticed the lowest paid were taking the highest risk. We noticed that there were some in the United States of America who were more than willing to prioritize capitalism over human life. We noticed elections do matter. So much was happening in the Resting Spaces within our society, and I came to view the principle of Resting Space with an entirely new perspective. Instead of interpreting "empty" or "open" space as unattended or not accounted for, I now believe that it is a constructive staging ground where the real activity occurs. Drawing is all about possibility: taking the risk to go into the unknown for the promise of what might be revealed. There is no Resting Space.

These drawings were sent to the gallery in Los Angeles from my studio in Philadelphia the week before the video of George Floyd's murder in Minneapolis emerged. This overt racism and cruelty is nothing that We, The People, haven't seen before in America. We often have a short memory in this country; but a long history of this grotesque truth is embedded in who we are as a nation. Each time I put pen to paper, so to speak, it seems that another one of these all too common tragedies has occurred and revealed another irredeemable fracture. There is no Resting Space.

You Ought to See My Heart 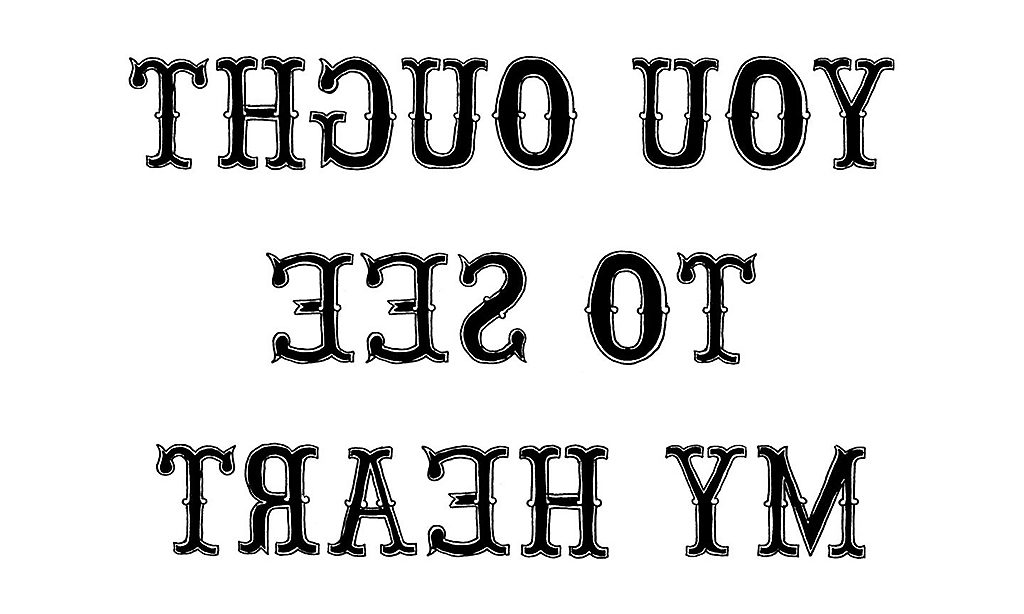 You Ought to See My Heart

I have lived with the words “You ought to see my heart” in my sketch book for at least 10 years. Fragments of song lyrics such as these—along with old craft and needlework projects, deteriorating mirrors and picture frames, remnants of yarn and notions, and vintage office and art supplies—are among the found “materials” I stockpile for inspiration and the supplies I use to make my visual and performance work. Read and see the rest of this illustrated essay here.

Art as an Act of Resistance: A Conversation With Shaun Leonardo, Dread Scott, and Clifford Owens

Coming of Age in the Time of the Hoodie

Sarah Ladipo Manyika (18); fiction writer: Earlier this year I decided to read Joe Brainard’s cult classic, I Remember. The book had long intrigued me for I had heard that it was widely taught in creative writing courses and was a favorite of many authors, including several well-known authors whose work I admire. I was immediately drawn to Brainard’s style, each line starting with the words “I remember.” As I read it, I found myself jotting down remembrances of my own, complementing Brainard’s memories of America with my memories of Nigeria.

[the ocean will take us one day]

Shelley Wong (17); poet: A trio of poems and a short essay, most of it written while at MacDowell, about intersectional identity as an Asian American queer woman. The first two show the intertwining of violence, joy, and collective resistance. They were published in 2017 as a special yearlong Kenyon Review "Resistance, Change, Survival" feature of artists responding to the Trump administration.

Your Voicemail Which Destroyed Me

Catherine Yu (17) responded to our invitation with a prose poem directly related to our current situation.

On Living: A Manifesto of An Incest Survivor

Moez Surani (18) fiction: a poem of violence. It is a collection of the names of military operations conducted by member states of the United Nations (UN) from the UN’s inception in October 1945, to the incorporation of the Responsibility to Protect (R2P) document in 2006.

Read an excerpt of "Operations"

One Day At the End of His World

A short story set in Yangon, Myanmar that is a response to social and economic deprivations by Howard Wolf (75, 16).

Conflict Is Not Abuse

Sarah Schulman (9x 86-19) wrote Conflict Is Not Abuse about “people experiencing the inevitable discomfort of human misunderstanding [who] often overstate the harm that has been done to them — they describe themselves as victims rather than as participants in a shared situation, according to this interview by Molly Fischer in New York magazine. Today, it seems more relevant than ever.

Byron Asher (18) composer: my Skrontch Music recording, which wrestles with social justice issues that we are very much still dealing with today, through the context of New Orleans jazz history.

A Reading of Bertram on Brooks on Walker

Anthony Paul De Ritis (2018) composer: A reading and electroacoustic setting of Lillian-Yvonne Bertram's poem: "Gwendolyn Brooks on Kara Walker's 'Gone, An Historical Romance of Civil War As it Occurred B'tween the Dusky Thighs of One Young Negress and Her Heart.'"

Rodrigo Martínez Torres (19) wrote "Interacción" thinking about a musical time-based on human interactions, instead of a constant beat or rhythm. The musical language in this piece is based solely on people listening to each other.

Composer Eric Chasalow (6x 84-19) was moved to write a song about the recent social upheaval and calls for social justice while at MacDowell in 2019.

Ghost of John William – Eric Chasalow (from the forth-coming album, Ghosts of Our Former Selves)

The history of our obsession with guns in the U.S. is long and feelings about it run so deep that rational discussion about the horrific violence this causes has been impossible.

I chose a modal frame and a traditional genre to signify that long history and wrote a text that is purposely without a specific reference to any time period, remote or current. The issue is not an artifact of history, but urgent and on-going. The cry that “this insanity has got to stop” is meant as a kind of exhausted scream.

I wrote the song out of a deep sense of frustration and exhaustion. The urgency that rises with each horrific incident recedes almost immediately, normalizing violence as something we are all supposed to accept for the sake of the rights of a minority to live without even reasonable restrictions. I find this intolerable, even from my position of both economic and racial privilege. It is our communities of color that suffer most from our glorification of guns. It is crystal clear that gun rights and white supremacy are intertwined. The deeply entrenched, well-financed gun-rights movement is, at its core, a fear-driven reactionary institution for maintaining our racist and classist power-structure. So the insanity I sing of in this song is about much more than unbridled gun ownership – it is about ever-present violence fueled by fear, greed, and hate.

Feeling fear and rage because they said so
Couldn’t say where it would stop.
Always said he’d never have to use it
But everybody wants to take their shot.

All that hatred blowing through the country
All that hate can’t be contained
Every hate just calling for another
When did life become a hateful game?

It’s a story older than the ages
Hatred calling from the mountaintops
All those neighbors aiming at each other
This insanity has got to stop.

Every gun just calling for another
Calling out from the mountaintop
Calling out like the only true religion
This insanity has got to stop.

The Prison in Twelve Landscapes (trailer)

Brett Story (18) is a filmmaker who offers this trailer to her formalist non-fiction feature film about the U.S. prison system.

Kate Levy (18), interdisciplinary artist: Made in collaboration with Will See and Bryce Detroit, back in 2016, in response to massive tax foreclosures occurring (and still occurring) in the city of Detroit.

The Gospel at Colonus

Naima Ramos-Chapman (19), filmmaker: Her short film about a young woman juggling between the mundane and the extraordinary in an attempt to leave her NYC apartment.

Memories of a Penitent Heart (trailer)