Our first round of presenting a “Conversation About Social Justice” drew so much response from our Fellows, that we had to follow it up with a second. This project began with an invitation to Fellows from Madam Chairman of the MacDowell Board Nell Painter (16, 19). In that invitation, Painter noted that while Fellows have “long been making the art of redress, long before this current round of bloody injustice,” the social and political environment called out for us to make a space to present art made in protest of previous or current injustices. Our plan, during this time of social distancing, has always been to make some space available so that the exchange of ideas and discussion around social justice matters can continue through art.

Even as we have welcomed a small cohort of artists back to our Peterborough home, we anticipate this conversation to continue. Let this collection of visual, video, musical, architectural, interdisciplinary, sound, and written work act as a catalyst to more conversation and inspiration.

As ever, this invitation to take part is made with the understanding that it may seem to impose yet another task on artists who may be in the streets or emotionally drained. This understanding extends particularly but not exclusively to Black and Indigenous Fellows of Color, and to Fellow artists who have suffered personal losses.

We hope you enjoy what you find in these pages. 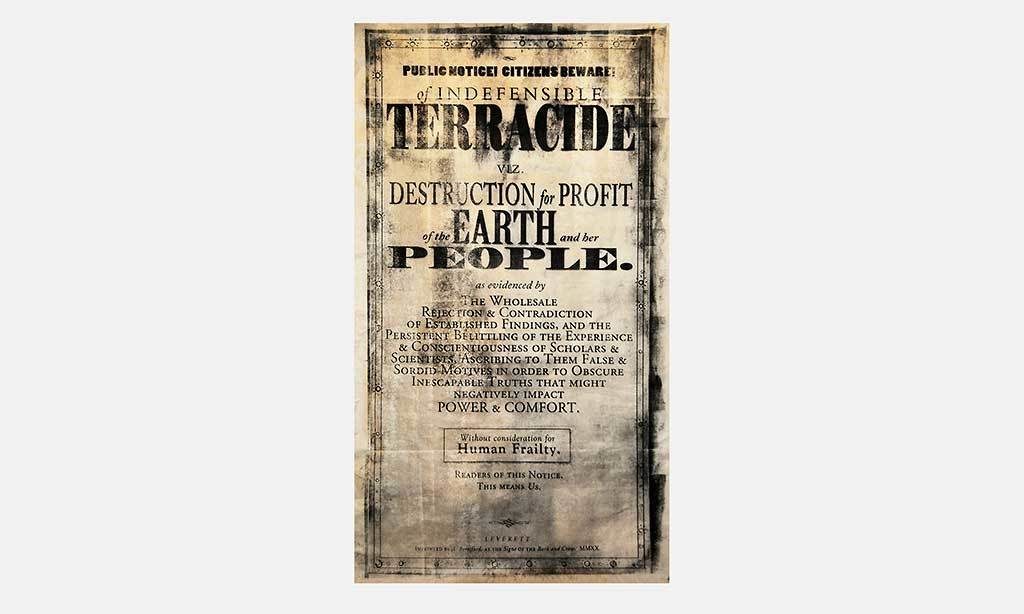 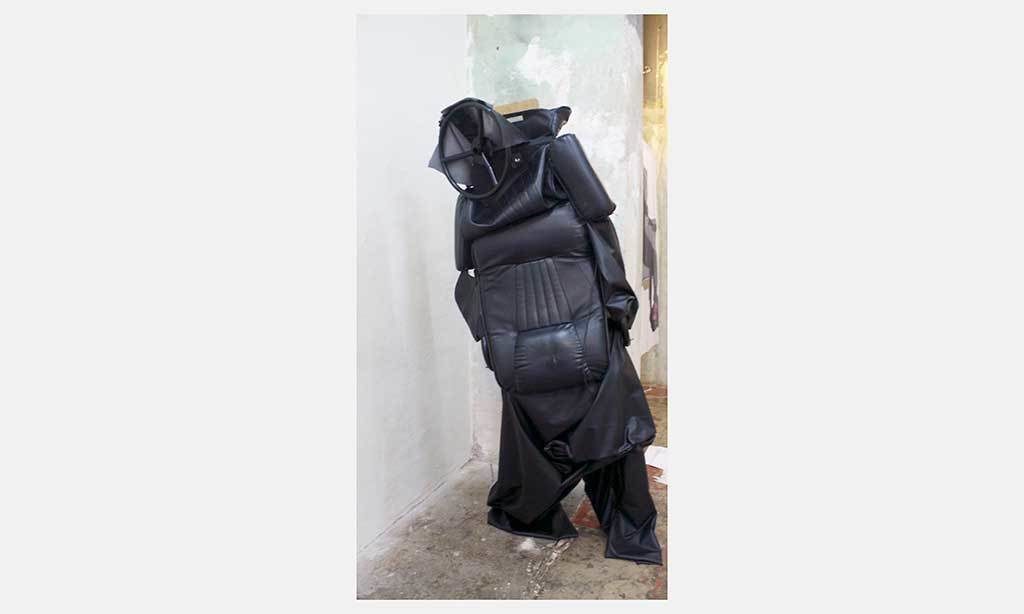 Chair nr 38 is a leatherette executive’s office chair with a footstool and massage function. It was developed using “performing furniture” to understand and undermine objectification. This is the first standing piece I made with a "face."

The foot of the swivel chair, like a car’s steering wheel, put me in mind of someone driving or steering their own identity because in this sculpture it serves as a face. The central part of this face has a barrel that reminded me of a gun and this, in turn, got me thinking about shooting identity, or which identities are more vulnerable than others.

I view this work as a layered metaphor for finding peace with who you are and attempting to secure and take control of your identity by wresting the steering wheel from a path of objectification.

This is also my first sculpture with an audible "voice." The massage function is concealed in the chest and has been altered in such a way as to make audible up to 14 different beats. These beats resemble a range of sounds from gunfire to a slow (or rapid) heartbeat. Both sounds reverberate from the chest.

Whilst it was not a conscious decision, I soon realized that drive-by shootings of Black people in the U.S. are being processed in this piece. The footstool that forms the hood of the figure has the text "footstool do not sit here" written on it. As "sitting" on Black individuals has resulted in some of the most shocking examples of recent police brutality. The figure is androgynous as victims are male, female, and trans. Some of the noises made are loud but many are low-level background noises that you really only notice when they stop. The figure hovers between a chair or thing, and then figure, depending on your viewing angle.

In order to end the conflict, a strategy could be to try to understand the other party (weaponized police and citizens that insist on shooting unarmed Black individuals) as fully as possible.

What is it that people see when they see a "black figure" and shoot? Could it be this animal, object, or figure with a loaded face?

A work just featuring a "loaded face" from this body of work was featured in contemporary and magazine. 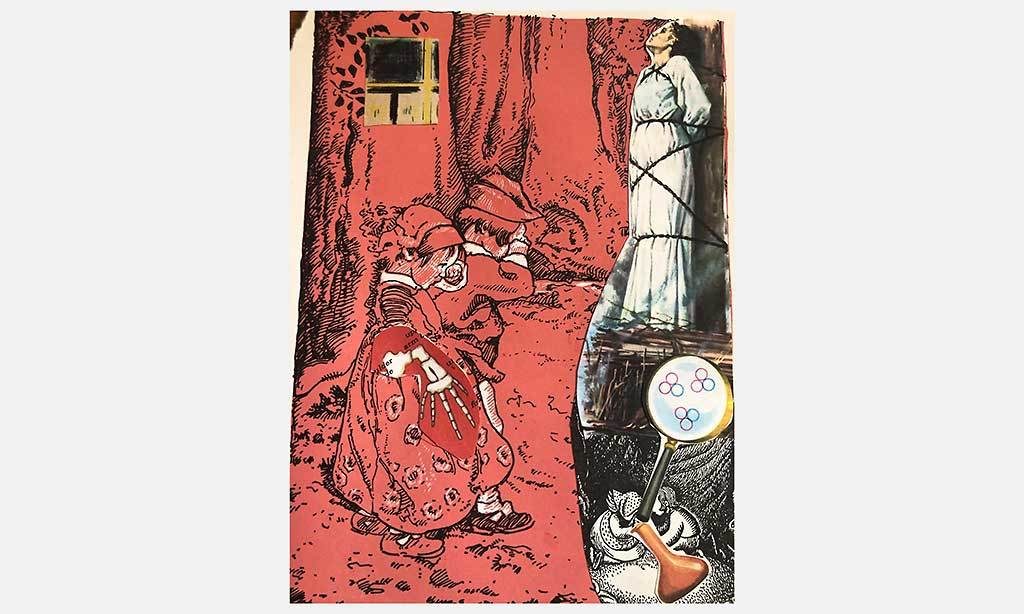 Abolitionists in a Flood 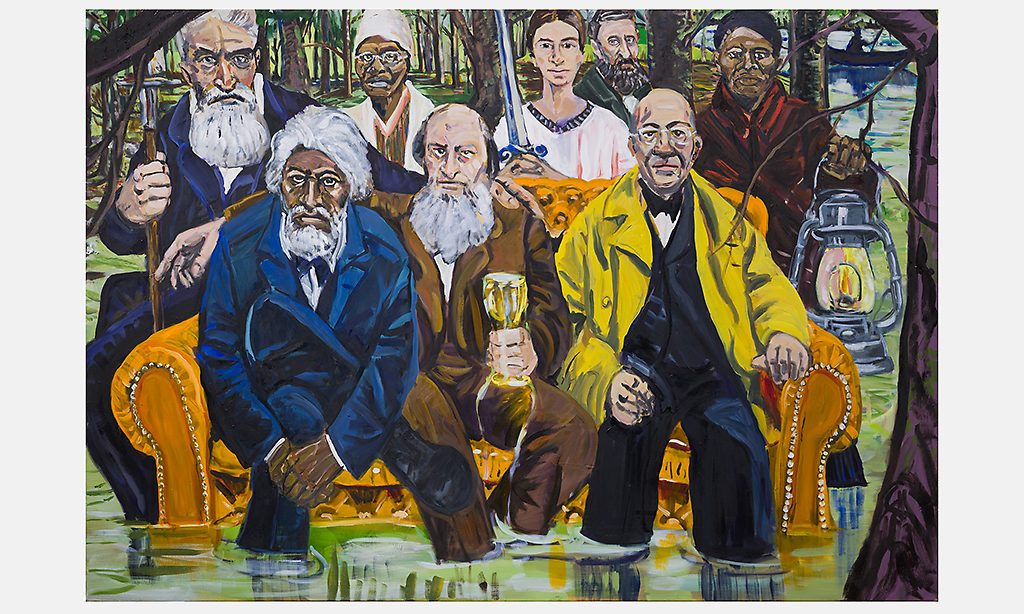 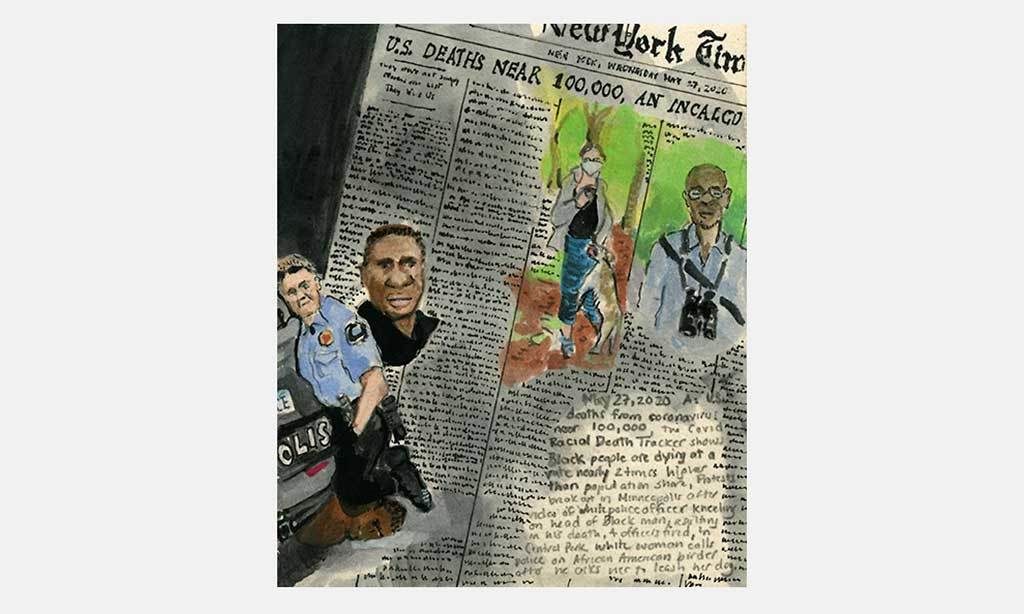 From the series “Diary of a Radio Junkie"; ink pen, gouache, watercolor, graphite on paper; 7.75 in X 6.5 in; 2020 (Peter Nobel Collection, Switzerland); Elise Engler (03, 17), painter.As U.S. deaths from coronavirus near 100,000, the Covid Racial Death Tracker shows Black people are dying at a rate nearly two times higher than the population as a whole, protests break out in Minneapolis after video of White police officer kneeling on head of Black man resulting in his death, 4 officers fired, In Central Park a White woman calls police on an African-American birder after he asked her to leash her dog. 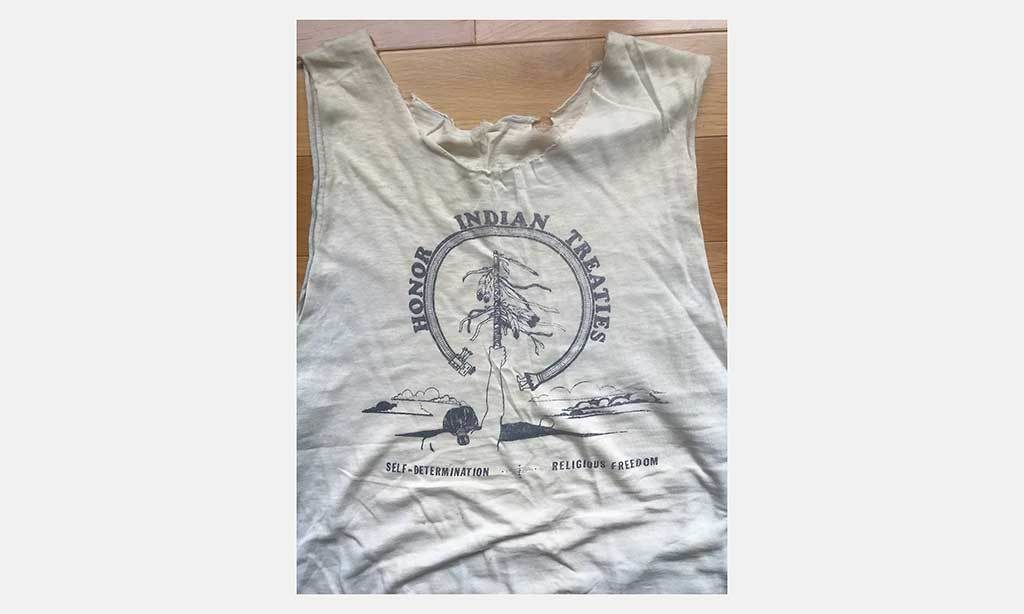 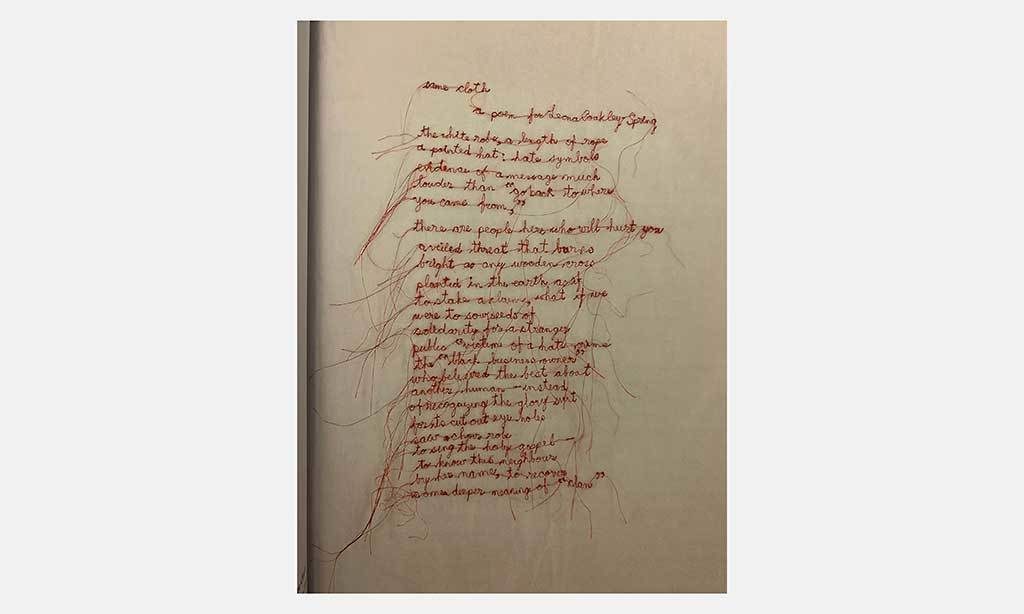 slipstream (by the light of the moon), 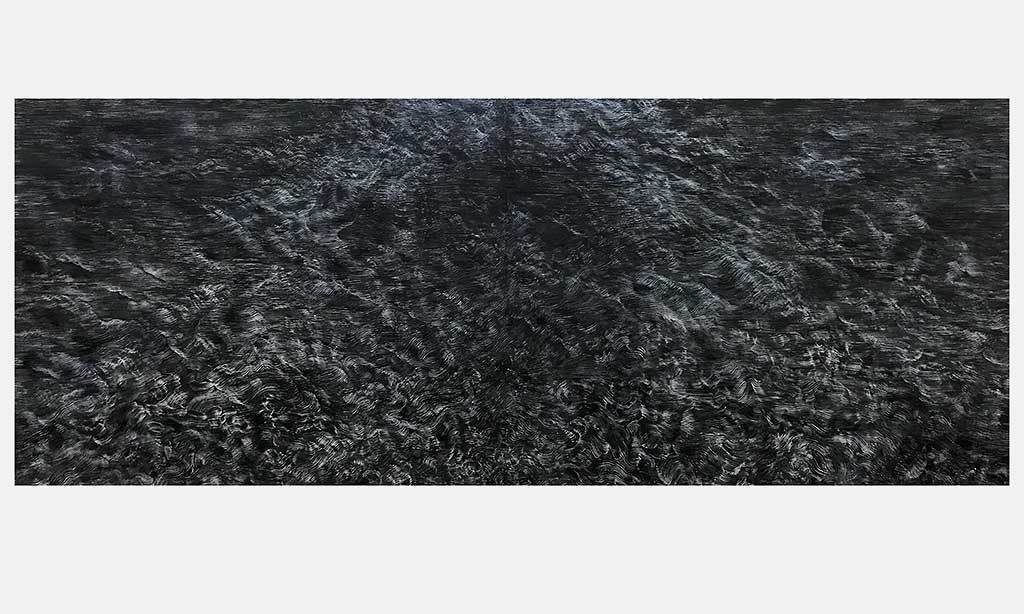 White pigment ink/gouache on black clay board; 4 ft X 10 ft; 2018; 2018; Mary Ann Peters (10), painter; collection of the Portland Art Museum.Imagining the precarious experience of refugees crossing water in the dead of night, I made this work. It accompanies a series I have been doing called “this trembling turf.” All of my work in recent years and since my MacDowell residency is research-based and aligns with diaspora narratives of the Middle East, now, and at the turn of the 20th century. The title references the wake of a boat and also a secondary definition of slipstream, which means to be pulled along against one’s will. 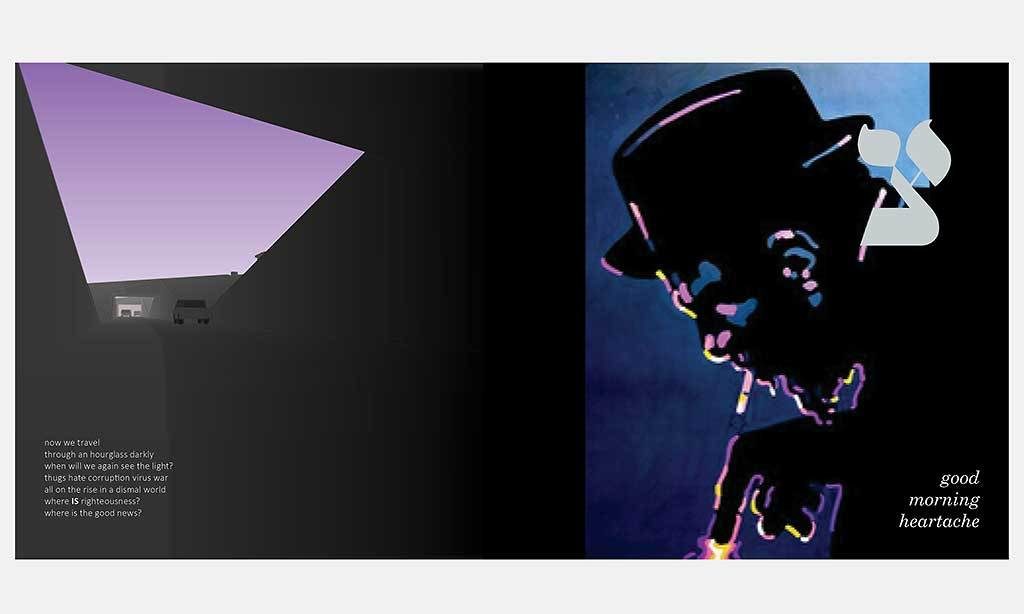 18th in a series of 22 studies; Jonathan Block Friedman (94, 09), architect. Watch the presentation video below.

Poet Ailish Hopper (13) offers the poem "Did it Ever Occur to You that Maybe You're Falling in Love," which was published by POETRY magazine in 2016, and was featured in a Bill Moyers' "civic poetry" episode and appears in the just-released anthology of writing by women climate leaders, All We Can Save.

Jackhammering Limestone and Too Strong

Fiction writer Michael Scott Moore (19) offers two linked short stories about racism in a fictional town, based on true stories about Miles Davis and Nick Gabaldón. Gabaldón is credited as being the first documented Black (and Latino) surfer in the United States.

How Many Crows Does it Take to Make a Murder

Poet Tracie Morris (15) submitted a poem, "How Many Crows Does it Take to Make a Murder," after Duriel E. Harris’ "He Who Fights With Monsters."

Poet Mihaela Moscaliuc (19) sent in a few poems, the first, "Empathy test," was written soon after the murder of George Floyd. The others address other types of social injustice.

Jeneva Burroughs Stone (12) sent us an essay on sexual assault entitled "R: An Aftermath" that has recently been published in the New England Review.

Playwright Mashuq Mushtaq Deen (15) sent us this performative monologue where a transgender man speaks the questions out loud, earnestly.

Sound artist Alan Nakagawa (15) presents his work, "Peace Resonance," which was presented at the Hirshhorn Museum in Washington, D.C.

"Blind Injustice" is a new opera with music by Scott Davenport Richards and a libretto by David Cote (09), directed by Robin Guarino. Cincinnati Opera commissioned the opera and produced the world premiere in July 2019. The fast-moving, episodic story is based on real stories of six people who were wrongfully convicted and ultimately exonerated. Based on the acclaimed book "Blind Injustice" by Mark Godsey, co-founder of the Ohio Innocence Project.

Composer Austin Yip (19) submitted "sound without sound," which he created for this project.

Playwright and performance artist Richard Montoya (15) sent us this trailer for the documentary “Carlos Almaraz: Playing with Fire.” It kicked off the 22nd Annual Cine Las Americas International Film Festival in 2019 and was directed by Elsa Flores Almaraz and Montoya.
Go to Part 1
go to paRT 3